AN IRISH Grandmother who has taken up a new pastime since lockdown first began last year has been invited to a number of mass services in the United States.

Meath great-great-grandmother Nancy Stewart celebrated her 107th birthday just before Christmas away from her extended family.

Nancy has been cocooning with her granddaughter Louise Coghlan since last March and has emerged as something of a celebrity during lockdown, as Louise helped her set up a popular Facebook page, Living and Laughing with Lou.

With church services having been closed down for the best part of a year, Nancy, like thousands of others, has been attending mass online-- but has gone a bit further afield than most others.

Something of a mass tourist, Nancy has watched services in all 32 counties of Ireland, and as the following of her Facebook page grew, she received invitations to attend virtual mass in other countries. 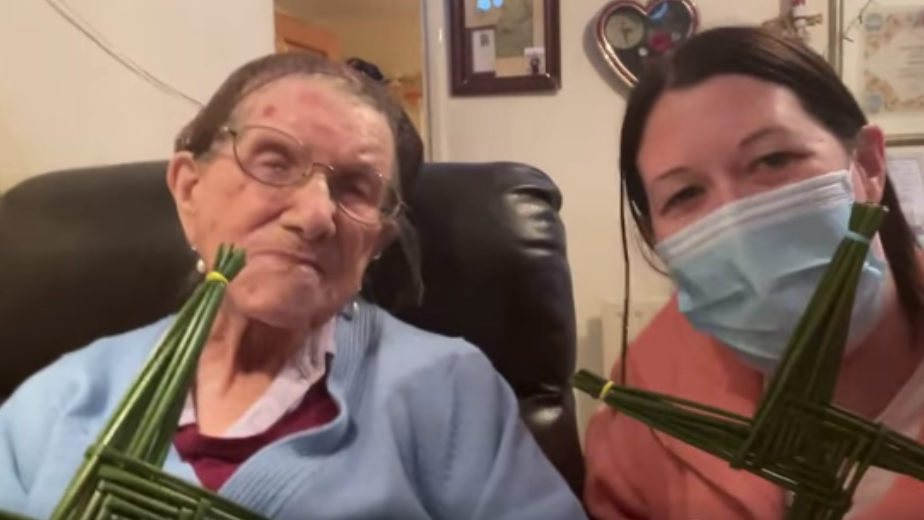 Her granddaughter, Louise, revealed to BreakingNews.ie that Nancy-- who has survived two World Wars and is living through her second pandemic, having been an infant at the time of the 1918 Spanish Influenza outbreak-- has been asked to attend services in Europe, the UK and even the United States.

Nancy and Louise celebrated St Brigid's Day yesterday, with the Living and Laughing with Lou page sharing a picture of Nancy with a traditional St Brigid's Cross, and Louise told the outlet they had " always planned to complete the nationwide 32 county virtual tour by the last day of January and we intend to go international from St Bridget’s day".

How cute is Granny? 😍😍😍😍 Thanks a million Larry Malone for the lovely St. Brigid’s Cross- a mighty Broadford man, such kindness & thoughfulness & it’s appreciated so much ⭐️

Posted by Living and Laughing with Lou on Tuesday, 2 February 2021

Nancy has accepted special invitations to attend virtual mass in Old St Pat's in Chicago, St Barnabas Parish in the Bronx, New York, the Irish Pontifical College in Rome and St Anthony's Parish in London-- and that's just the beginning.

Louise revealed that she and Nancy have begun phoning the priests after services, to discuss the sermon and have a general chat-- something which many religious people are missing as part of their weekly routines.

At 107, Nancy is the oldest person in Ireland to still be living in her own home-- but she's also managing to tour the world, all through the power of the internet.

You can check out Nancy and Louise's virtual adventures on the Living and Laughing with Lou page here.