A JOINT British-Irish ceremony has taken place in Belgium to mark the centenary of the World War I battle that brought Irish Catholic and Ulster Protestant soldiers together for the first time.

Taoiseach Enda Kenny and Prince William were in attendance at the Island of Ireland Peace Park in Messines, on the 100th anniversary of the first day of the week-long battle.

The commemoration marks Mr Kenny’s last overseas engagement as Taoiseach before he steps down later this month.

The small Belgian village of Messines was fought over for seven days in June 1917, and marked the first time during Great War that soldiers from the 36th (Ulster) Division and the 16th (Irish) Division had fought together.

The Duke and @EndaKennyTD lay wreaths at the foot of the Round Tower in remembrance of those who lost their lives during the Battle. pic.twitter.com/c48yvps4id

The two divisions were mostly made up of soldiers from opposite sides of the great political divide back in Ireland following the 1916 Easter Rising.

The offensive resulted in victory for the British Army but at the cost of 10,000 young men killed or wounded, with no shortage of Irish names among those lost.

Prince William and the Taoiseach were joined by Princess Astrid of Belgium and Lord Dunlop, Parliamentary Under-Secretary of State at the Northern Ireland Office to honour the soldiers who fought in the battle.

They laid wreaths at the foot of the Irish Round Tower memorial, before meeting invited guests including descendants of those who fought. 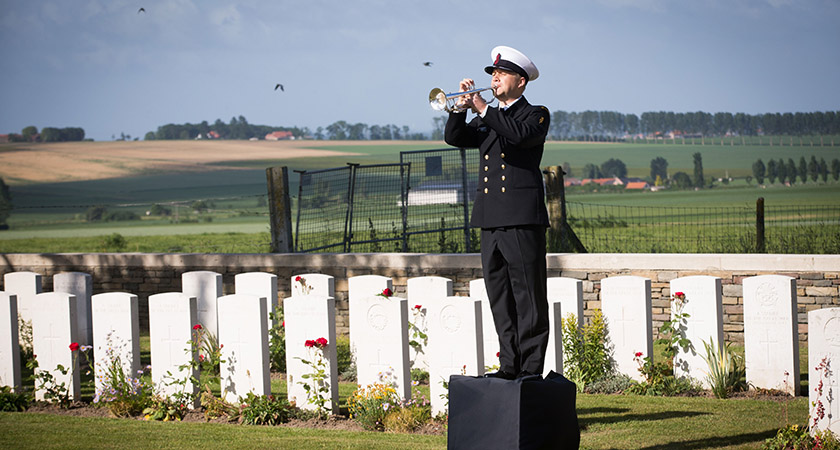 A soldier plays trumpet during the commemoration of the centenary of the Battle of Messines. Picture: Kurt Desplenter/AFP/Getty

Following the ceremony, the Taoiseach, Duke of Cambridge and Princess Astrid travelled to Wytschaete Cemetery where over 1,000 servicemen of the First World War are buried or commemorated.

Major Redmond’s death was mourned throughout Britain and Ireland, even by those opposed to his well-known belief in Irish nationalism.

His death in battle made more international impact than the death of any other British soldier in the Great War, except for Lord Kitchener.

The Wexford native believed that by fighting for the British Army in the Great War, that the Irish would be rewarded with Home Rule.

The Island of Ireland Peace Park in Messines was opened in 1998 and features a 110-foot traditional Irish round tower.