2016: a centenary year to celebrate and to reflect upon

There was talk of 1916 chocolate, amongst other delights and the Government released an excruciating video, Ireland 2016, that seemed to advertise Facebook and Twitter more than James Connolly, and made Ireland look like a mere corporate business.

As someone who has had years of being derided as a ‘Plastic Paddy’, I was amazed to see official Ireland’s attempt to make the whole nation plastic.

So, it could have all gone wrong. But it didn’t. 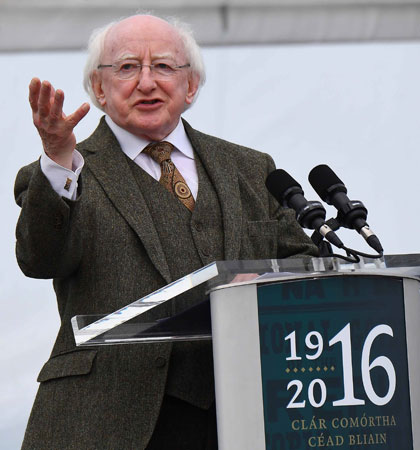 Michael D Higgins helped show Ireland at its best on the international stage in 2016 (Image: rollingnews.ie)

It wasn’t just the kids coming home singing the national anthem in Irish and talking about James Connolly and Thomas MacDonagh and Michael Collins. It wasn’t just that the worst excesses and examples of nationalism didn’t surface, despite the flags lining the bypass.

Long before Donald Trump, Ireland very nearly had a reality TV star as President. Dragons’ Den businessman Sean Gallagher looked set to sweep in to office on a platform of inspirational jargon and anti-politics until his links to Fianna Fáil were revealed live on air and he was undone. So, how different it might have been.

The fact remains, though, that our president, Michael D Higgins has taken to office so eloquently, and in such a dignified way, that this figurehead, with his emigrant sisters still living in London, who called the Irish community in Britain "the living heart in the evolving British-Irish relationship", carried the 1916 commemorations along in such a way that left us all feeling just a little bit proud.

Because of Michael D 2016/1916 showed Ireland, on an international stage, at its best.

Which can’t have been the feeling of too many people after Britain’s vote to leave the EU. If 2016 was a milestone of something momentous in Ireland’s past, what is Brexit a milestone of in Britain’s future? The Irish Government is, of course, worried about Brexit in terms of economics and trade and exports.

As emigrants and as children of emigrants though – as a newspaper founded by Irish people for the Irish in Britain – how do we feel about Brexit?

Looking at it from this side of the Irish Sea I can’t help feeling there is one enduring aspect of the Brexit vote that everyone in Britain is going to have to come to terms with.

From a campaign run on anti-immigrant, anti-Muslim, ‘take back our country’ lines, it still seems astonishing to me, as I have written before, that not one Leave voter seems willing to admit that it was an anti-immigrant urge that made them vote the way they did.

Some people wrote to this paper berating me for suggesting Brexit was a racist vote, but nobody seems able to give a reason as to why it was not.

Now, I grew up in a run-down immigrant area of Britain, and I know for a fact that it wasn’t a case of us all holding hands and skipping in and out of each other’s houses, but seriously, how did it come to this?

And how did anyone Irish in Britain vote Leave in response to a campaign that sought to play on people’s fears of different cultures and different peoples?

How did anyone Irish in Britain vote Leave on the back of a campaign that sought to demonise a whole section of the community as ‘suspect’?

Of course, some of the main people of 2016 came from the world of politics, and the dangerous changes sweeping through it; Nigel Farage, Boris Johnson, Donald Trump will all feature heavily in any end of year retrospective.

They’ll have to move aside at some stage, though, for Robbie Brady. 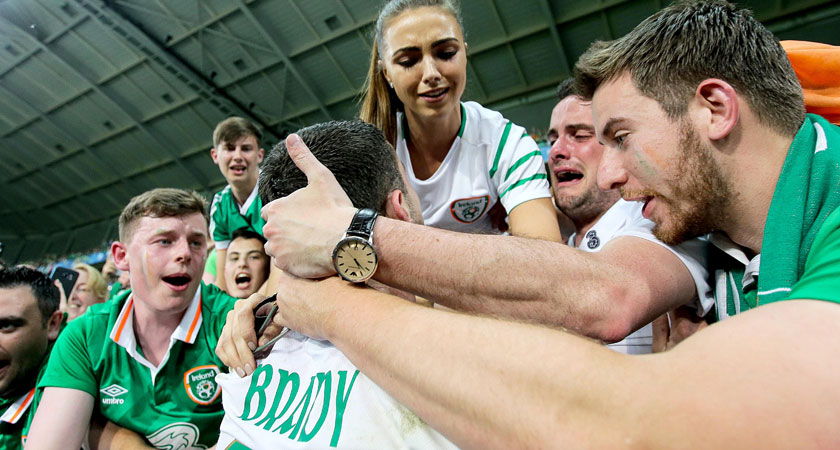 Robbie Brady celebrates with family and fans after his winner against Italy (Image: inpho.ie)

Brady’s headed goal, in June against Italy, sealed not only a great win on an international stage, but saw 2016 as the year we finally admitted we were back in love with the Republic of Ireland football team.

The fact is, the bitterness of Saipan felt, at times, like it would never go away and the Irish-born and Irish-reared divide – fuelled by the likes of Eamon Dunphy – just felt like it might never stop.

But on that night against Italy, Wes Hoolihan’s in-swinging ball and Brady’s head, and Roy Keane celebrating on the bench, made 2016 feel like Saipan had never happened.

And, anyway, we may never know the real truth behind the sensationalised reporting of that infamous spat between Roy and Mick McCarthy. Watching those events unfold in Lille, though, I finally couldn’t have cared less.

Which also means we can’t let 2016 pass without a quick comment on another footballer, James McClean.

The Derry man is that unusual thing in modern sport in being someone who speaks his own mind, and his labelling of the Derry City manager as ‘silly and stupid’ in relation to his reiterating the old prejudice about having a pint of Guinness meaning you could play for Ireland is to be welcomed.

It’s only a local matter, for sure, a local row – but in the light of the world of 2016, that is a comfort in itself. I’ll take Brady’s goal and tears over the gruesome winning smile of Nigel Farage, whatever the year.

The Independent called 2016 ‘the deadliest year yet’ in the continuing refugee crisis… Can we as Irish people, from one of the great migrant nations, just look on that and say nothing?

Of course, we can’t really talk about 2016 without talking about the refugee crisis. The Independent called 2016 ‘the deadliest year yet’ in the continuing refugee crisis and the International Organisation for Migration has predicted that the death toll will reach 10,000 people.

Can we as Irish people, from one of the great migrant nations, just look on that and say nothing? Those people are fleeing violence and famine and poverty.

Irish people have fled at least two of those in historically recent times, and we might now be spreading around the globe on international flights rather than rickety boats, but can we really have forgotten ourselves so fully as to have no empathy with these people? 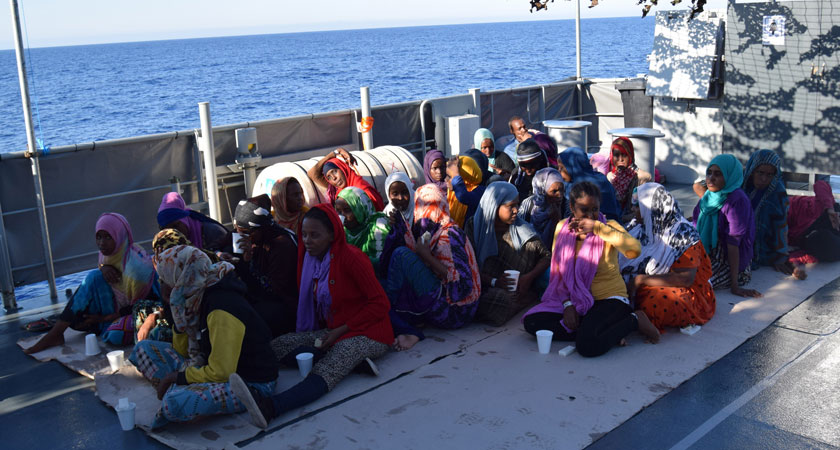 The Irish ship LE James helped rescue hundreds of refugees off the Libyan coast in September, but can Ireland be doing more to help refugees? (Image: rollingnews,ie)

Ireland’s direct provision system for asylum seekers has already attracted the attention of Amnesty International and is surely going to be our future Magdalene Laundries, but outside of that? How do we, as people of the emigrant Irish, feel about those lost souls?

Is our response really Brexit and its borders and our own 2004 citizenship referendum? Is that what we will say?

Our 2017 could be a year where we as emigrant Irish, as a nation formed and shaped by emigrants, right back to those many rebels of 1916 born outside of Ireland itself, act as a beacon of hope for all those fleeing and lost.

Our current President Michael D is a big football fan. How fitting, then, in this year that a statesman with his quiet dignity and learning should share the stage of 2016 with a footballer from the streets of Dublin as the best of what Ireland has to offer.

These are turbulent times, and as for what 2017 holds – with Brexit and Trump looming – your guess is as good as mine.

It might be fitting, though, as we face in to it to borrow from one of Michael D Higgins’ speeches about Ireland and Britain, especially in the pages of this paper, which only exists because of the relationship between Britain and Ireland: Ar scáth a chéile a mhairimíd – We live in the shelter of each other.

Happy Christmas, and a Happy New Year to you all.