A CATHOLIC PRIEST has carried out an exorcism on a abortion clinic near Dublin.

The American priest was attempting to rid the clinic of “demonic oppression”.

Fr. Stephen Imbarrato, known as the ‘Protest Priest’ in the US, led a prayer vigil outside Dr. Jim McShane’s abortion centre in Glasthule, Dun Laoghaire, before later attempting an exocrism.

The priest was unable to directly influence any individuals during the exorcism as the practice was closed on account of it being a Saturday. 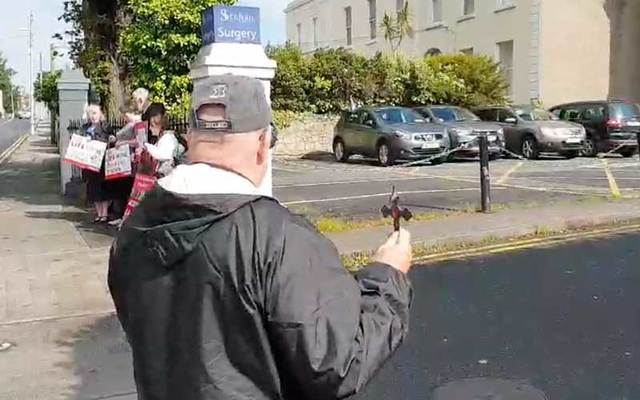 Fr Imbarrato performs an exorcism on a Dublin abortion clinic

In a video posted on Facebook, Fr. Imbarrato said he was conducting an “exorcism of location” asking God to rid the clinic of evil and “demonic influence.''

He argued that the clinic was “under the tyranny of the devil", and that those who operate within are also at risk of the same fate.

With a handful of pro-life supporters nearby, Imbarrato took out a crucifix and began the ritual, attempting to rid the building of evil spirits. He then began to walk around the outskirts of the property, splashing holy-water as he went.

The Dun Laoghaire Together for Choice and Equality group posted a warning about the priest’s visit, saying on Facebook: “We have received word that the anti choice people are outside a Doctors in Glasthule again today. We understand that practice is not open today, but still believe this is unacceptable on many levels.

Imbarrato is the leader of Red Rose Rescue - a pro-life activist group.

He said that he was “disappointed” that more bishops and other clergy in Ireland haven’t come forward to offer him support, and adds that he’s been given confusing messages about last year’s referendum which saw abortion legalised throughout the country.

Fr. Imbarrato said he took the decision to perform an exorcism on the Dublin clinic after speaking with Irish pro-life groups.

He also claimed that due to his mother’s Irish roots, he might have a claim to Irish citizenship and he vowed to return to the country to exercise his right as a citizen to protest abortion.

Fr Stephen Imbarrato led the vigil outside abortionist Dr. Jim McShane's murder mill in Glasthule, Dún Laoghaire this morning. He then performed an exorcism on the mill. 🙏
https://www.facebook.com/fatherstephen.imbarrato

Posted by Our Lady of Lourdes Protectors on Saturday, June 15, 2019