CAMPAIGNERS in Galway have managed to successfully have a memorial plaque to an Easter Rising leader restored to its original place outside the city’s train station.

The plaque, commemorating Galwegian and prominent Irish republican Éamonn Ceannt was unveiled on the façade of the station 50 years ago.

But it vanished from its spot in 2014, causing some in the city to question its whereabouts.

Now, after a group of campaigners challenged station chiefs, the plaque will be restored to its previous location ahead of the centenary of the Easter Rising.

“It was always there on the building’s face but the last few years, we’re not exactly sure when, it was removed,” Éamonn Ceannt Action Group’s Damien Quinn told The Irish Post.

The Galway 1916 Commemoration Committee, the Galway City Council Heritage Officer and the Éamonn Ceannt Action Group all made the call for it to be restored to its original location.

Last September even saw Galway City Council pass a motion calling for the plaque to be returned to its original position. 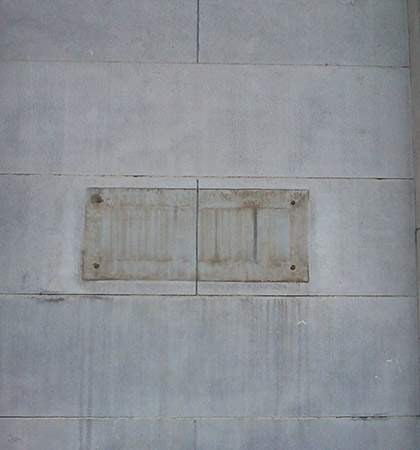 The vacant space where the plaque once was.

A call to Ceannt Station revealed that the plaque had been removed for restorative work and cleaning – and Córas Iompair Éireann (CIÉ), Ireland’s public transport provider, insists it was merely moved to inside the station walls.

“The plaque commemorating Ceannt was removed to be cleaned during 2014,” a CIÉ spokesperson told The Irish Post.

“When this was completed we reviewed the positioning of the plaque.

“At its original location, it was frequently hidden by crowds waiting, and stopping to read it would result in congestion at the station entrance / exit.

Mr Quinn, a historian and graduate of the local university, NUI Galway, called the initial refusal to put the plaque back in its original spot “denationalisation of public space”.

But after a meeting with the stationmaster this week, the Éamonn Ceannt Action Group were assured it would be restored to its original position "in the coming days".

“We have received a number of representations to restore it to its original position, and understand the wish to have it in a more visible location to the wider public,” CIÉ’s Barry Kenny told The Irish Post.

“We are therefore making arrangements to restore it to its original location.”

Originally unveiled in 1966 by Josie O’Keefe, a member of Cumann na mBan, the plaque commemorates Ceannt, who was executed on May 8, 1916 for his part in the Rising.

Ballymoe, Co. Galway native Ceannt joined plans for the Easter Rising in May of 1915 – and was one of the seven men to sign the Proclamation of Independence.

The train station was named in his honour when the plaque was unveiled on April 10, 1966.