Defenceless chicken 'used as a football' by gang of drunk youths

A CHICKEN was rescued by an animal welfare group after it was found being used as a football by a gang of drunken youths.

Waterford Animal Welfare said they were alerted by gardai to the situation on Monday evening.

When they arrived at the scene, members of the group said they found the chicken "cowering in the corner and surrounded by beer cans."

They rescued the chicken and brought it to a vet where it was discovered that the chicken's wings had been clipped so it couldn't fly, and due to a severely infected wound, it couldn't walk either.

Sadly, because of the wound, vets decided the best course of action was to put the chicken down.

A spokesman for the charity told Independent.ie that the chicken was in "horrendous condition."

"The chicken, according to witnesses, was being used as a football by a group of intoxicated young adults.

"My daughter went over and rescued the chicken off him. We brought it to a vet. We discovered its wings had been clipped so it couldn't fly, it was unable to walk. It had an infection on its chest from pushing itself across the ground.

"He was in a terrible state, he was cowering in a corner between a fence and a wall and there was cans all over it."

Gardai confirmed that they had notified the animal welfare group about an injured hen in Waterford, adding that while an investigation is ongoing, thus far no arrests have been made. 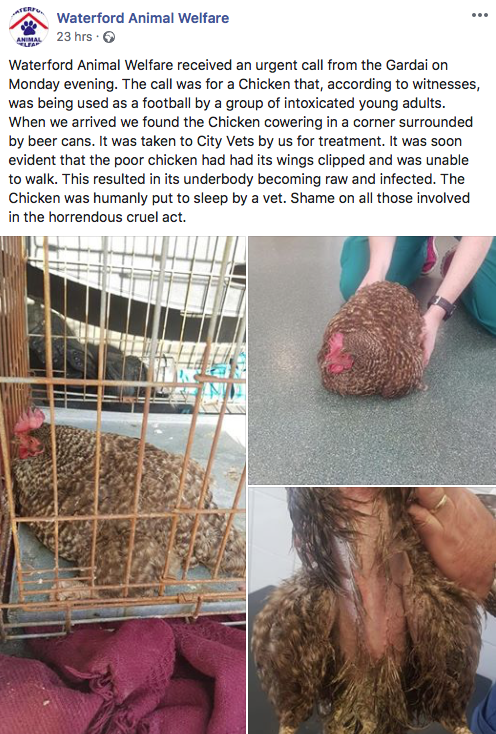