The President unveiled his new line of 'Irish-Americans for Trump' products, which are being rolled out for the March 17 celebrations.

Taking to Facebook last week, Trump encouraged his supporters to "capture the luck of the Irish" with his new merchandise line, which includes "Irish Americans for Trump" T-shirts ($35), "Irish Americans for Trump" Pint Glasses ($35), "Trump Luck of the Irish" Whiskey Glasses ($30) and the classic Keep America Great caps ($50).

The merchandise, as you might expect, proudly advertises itself as 'made in the USA'. 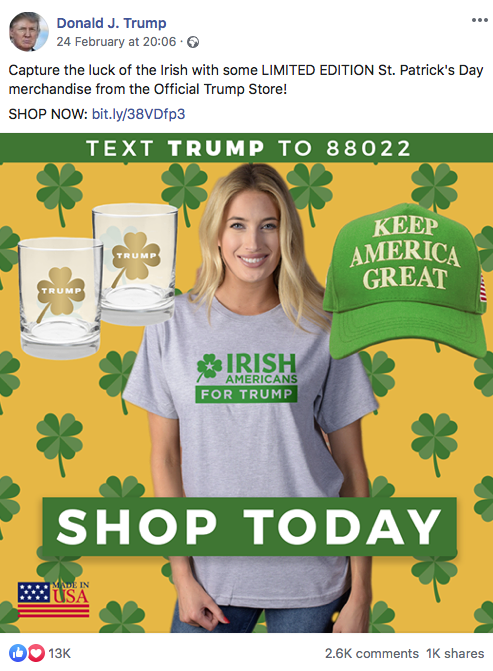 "Capture the luck of the Irish with some LIMITED EDITION St. Patrick's Day merchandise from the Official Trump Store," The President wrote on his campaign's Facebook page.

To celebrate St. Patrick's Day, Taoiseach Leo Varadkar will make the traditional trip to Washington to meet with Trump, to hand him a bowl of shamrock.

If a new government is formed before then however, the new Taoiseach will take his place.

But until then, Varadkar is booked in, but whether he'll turn up in a delightful "Irish-Americans for Trump" t-shirt remains to be seen.