A MANCHESTER based entertainer who recently took on a 24-hour ‘swingathon’ to raise funds for charity has received an award honouring his ongoing fundraising efforts.

In March, Urmston man Wayne Devlin sang over 600 songs from the Great American Songbook for a full 24 hours to raise funds for the Alzheimer’s Society.

Mr Devlin organised the fundraiser as a tribute to his musical hero, Tony Bennett, who is living with Alzheimer’s.
The event raised well over £8,000 for the Alzheimer’s Society, but over the past decade, Wayne has raised an additional £500,000 towards charitable causes.

The singer, whose father hails from Newry in Co. Down, was honoured this month with a Points of Light Award, marking his “exceptional services to fundraising”.

The award ceremony, which took place at Stretford Public Hall on Friday, May 14, saw Mr Devlin presented with his award by Kate Green, the MP for Stretford and Urmston. 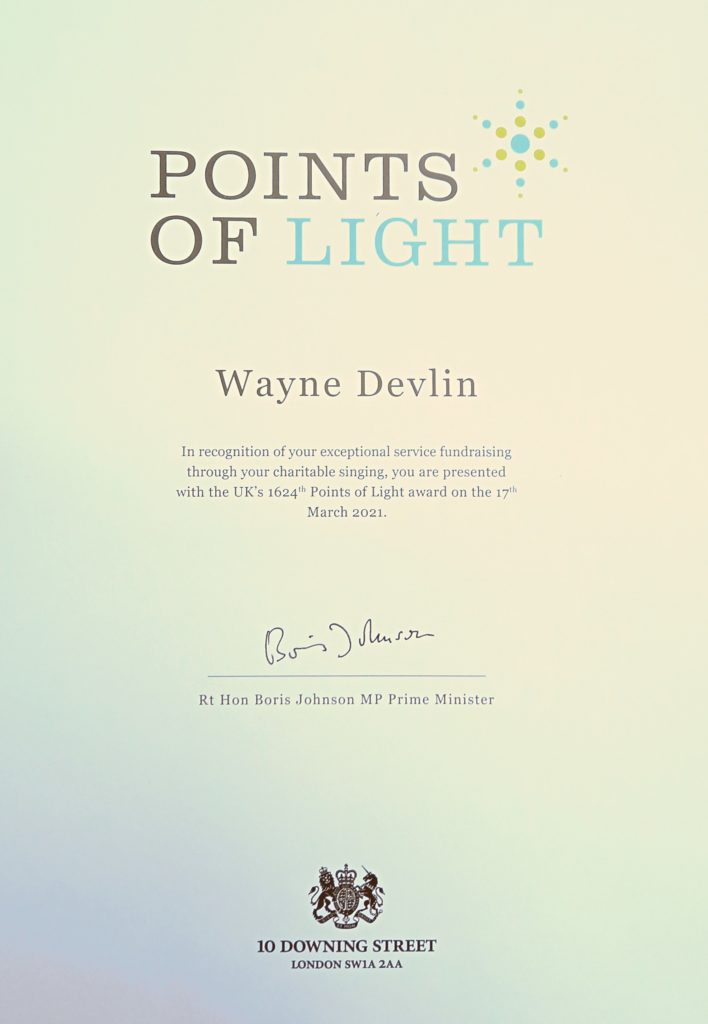 The award is issued by the Prime Minister’s office, to recognise ‘outstanding individual volunteers for making a change within their community’.

“I’d like to thank Wayne for his hard work and dedication to charitable causes within Stretford and Urmston,” Ms Green said.

“I’m pleased that Downing Street has acknowledged Wayne’s charitable efforts, as I know just how hard he works to fundraise for charities within my constituency.”

She added: “As a Music for Dementia champion myself, I know the difference that music can make to those living with this dreadful disease, so it seems apt that Wayne used his voice to raise these much-needed funds for the Alzheimer’s Society.”