GARDAÍ ARE investigating after a clip was widely shared on social media showing a series of vehicles-- including a hearse-- driving dangerously in Dublin.

In the video, taken by a man travelling in a car behind a hearse, vehicles could be seen driving at speed, beeping and cheering, and veering in and out of heavy traffic.

At one point, footage captures several cars racing through a red light and driving on the wrong side of the road. 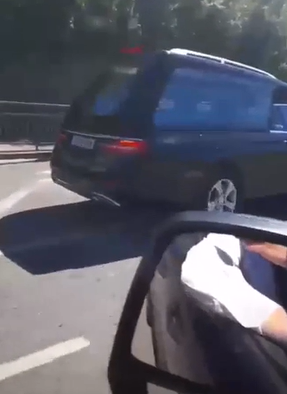 The shocking clip was shared widely on social media

The hearse itself, which is carrying a coffin, appeared to be driving at high speed as other cars and motorcycles raced behind it, beeping their horns and shouting, with most cars carrying images and tributes to the deceased. 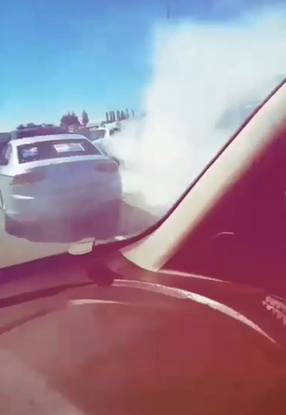 The hearse is understood to have been carrying the coffin of Dean Maguire, one of three men killed during a high-speed chase involving Gardaí on the N7 last week.

All three passengers were killed instantly when they travelled at speed down the wrong side of the N7 and smashed head-first into a lorry.

Throughout the video, the man filming could be heard shouting 'Go on, Deano!' as cars following behind the hearse revved their engines.

A spokesperson for An Garda Síochána told Extra.ie that the force was investigating "an incident of dangerous driving which occurred on and around the Old Naas Road and Crumlin areas of Dublin, Wednesday afternoon, July 14, 2021".

"Crumlin Gardai on patrol observed a number of vehicles engaged in dangerous and erratic driving. A managed containment operation was commenced and was subsequently stood down when the vehicles failed to stop."

Enquiries into the footage is ongoing.