GARDAI HAVE launched an investigation into an alleged assault that took place during anti-mask protests in Dublin over the weekend.

The demonstration began at Custom House Quay at 1pm this past Saturday, September 12.

It was organised by the anti-mask activism group Yellow Vest Ireland.

Thousands of demonstrators marched from Custom House Quay on to Golden Lane in the south of the city to protest Ireland’s Covid-19 restrictions and the use of face coverings.

Banners bearing slogans like “take off your mask” and “it’s only a common cold” could be seen during the march.

Initial reports suggested that the event took place without incident.

However, The Journal reports that Gardaí were forced intervene at Leinster House when the anti-mask protesters clashed with a counter demonstration.

The pro-mask counter-demonstration that began on O’Connell Street.

LGBT rights and Repeal the Eighth activist Izzy Kamikaze suffered a head injury while protesting against the anti-mask group.

She was later treated in hospital for her injuries.

Footage of the disturbing incident has been shared online.

So this was the peaceful protest at the Dáil today....also known as the Nazional Noose Rally.@IzzyKamikaze pic.twitter.com/UT2bE2Mey8

Kamikase told his followers on the social media platform: “I was assaulted under the noses of dozens of Gardaí.”

Gardaí at Pearse St have now confirmed that an investigation has been launched into the incident.

They also confirmed no arrests and no formal complaint has been made. 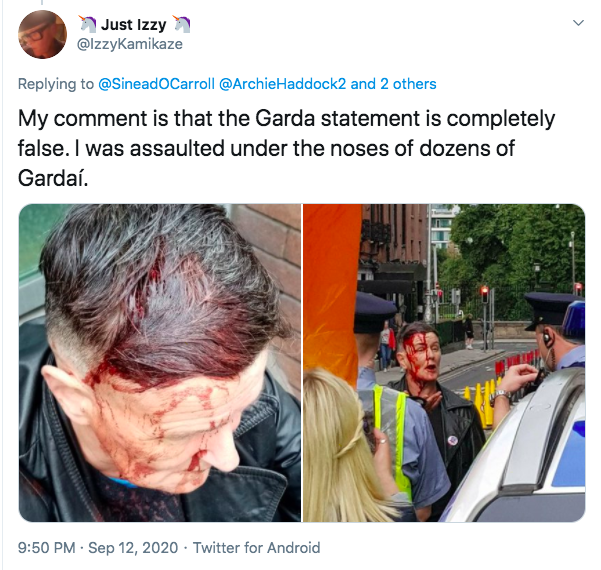 Izzy Kamikaze told her followers that that when she went to hospital, Gardaí told her they were “tracking the assailant on CCTV and could pick him up without my statement because there was so much CCTV evidence”.

Taoiseach Micheál Martin has expressed concern over the “extreme attitude” and “aggressive marching” of the anti-mask protesters.

They witnessed the assault. There's no statement yet because I went to the hospital & they say I have to make a statement at the Garda station. They told me they were tracking the assailant on CCTV & could pick him up without my statement because there was so much CCTV evidence. https://t.co/WNHBKIkZuy