GARDAÍ HAVE seized a horse and horsebox while investigating reports of sulky racing on a busy main road in County Kerry.

An Garda Síochána are appealing for witnesses into the incident, which allegedly took place on the N22 road in Glenflesk, Killarney, County Kerry at approximately 7am on Wednesday, April 15.

Gardaí attended the scene after receiving multiple reports of illegal sulky racing and connected dangerous driving, and while they say they did not witness the incident themselves, multiple videos purporting to show the race have surfaced on social media.

A horse was seized under the Control of Horses Act, and a horsebox and van were also taken for having no tax. 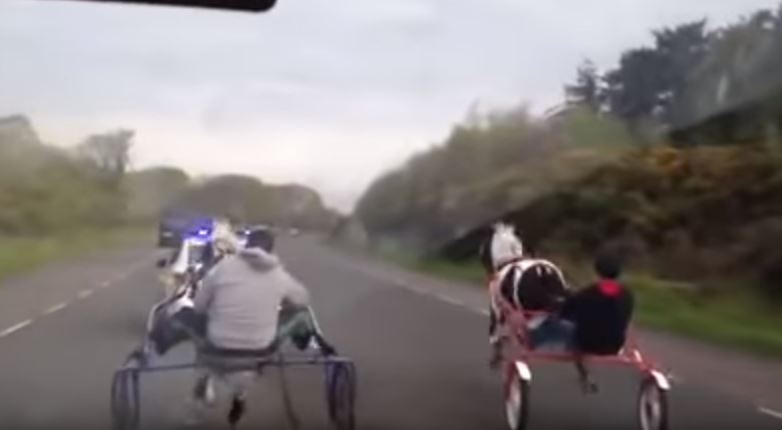 A sulky race on an Irish road, unrelated to the newest incident (Source: Youtube)

Speaking at Killarney Garda Station following the incident, Superintendent Flor Murphy said that Gardaí would be vigilant in ensuring horses were being properly controlled.

"I would appeal to horse owners and individuals who are in control of horses to abide by their responsibilities under the legislation.

"Gardaí will be particularly vigilant in relation to horses not being kept under proper control or where horses are creating a nuisance. Anyone who is found to be involved in illegal sulky racing or not taking responsibility for their horses will be dealt with under the relevant legislation”

Anyone who was in the Glenflesk area between 6am and 7.30am on the day, particularly road users who may have dash cam or video footage, are urged to contact Killarney Garda Station on 064 667 1160.

Local outlet Killarneytoday.com have reported that a further four horses have been seized in the area today, bringing the total number of horses seized in Killarney in the past week to seven.

It is understood that two more horses were seized earlier in the week after video footage emerged of a group of people congregating at Killarney's Ross Castle, with one person entering the water on horseback.