AN IRISH MAN has launched an appeal to anyone who could help him find his two French bulldogs who were stolen from his van.

The dogs - Henny and Penny - were taken on Sunday while their owner Sean McGann's van was parked in the Glencarr Waterfall area of Sligo.

The thieves apparently broke into the vehicle by smashing the drivers' side window of the van, before making off with the doggos. 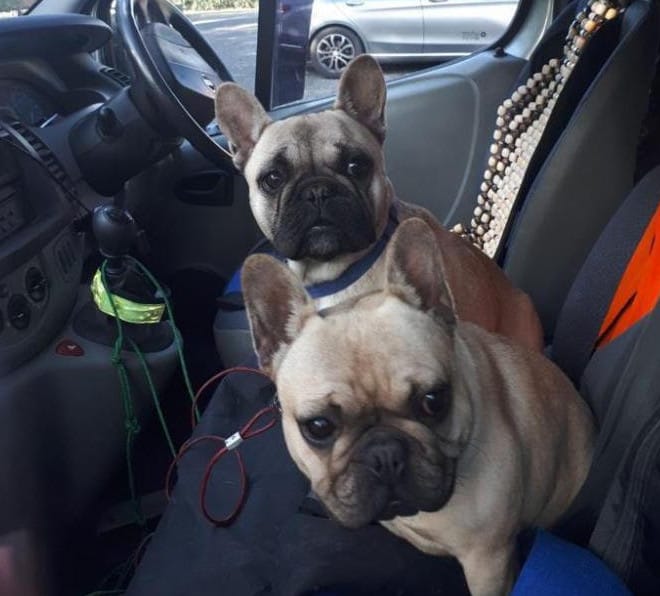 Henny and Penny were stolen from a van in Sligo (Credit: Facebook)

Sean was visiting the waterfall when he noticed a 'no dogs allowed' sign and left Henny and Penny in his camper-van.

After going for a short walk, he came back to discover the dogs had been taken, and Sean took to Facebook to post a public appeal.

"Please could everyone share this around, my two dogs were stolen from my van on Sunday around the Glencarr Waterfall area in Sligo," he wrote.

"I'd greatly appreciate if anyone that might know or have seen something this weekend in Sligo to contact me or the Grange Garda Station Sligo with information, please keep an eye out for them, thank you."

An "absolutely devastated" Sean spoke with Ocean FM saying that he was only visiting Sligo when the theft occurred.

"They had tried to force a back window, and they couldn't get in there so they broke the glass [on the window] on the driver's side.

"The guards are really good, they've been unbelievably helpful, and the forensic squad came out and were really good.

"I asked a couple of locals and they didn't see anything, but hopefully now I've put something on Facebook, someone might be in touch.

French bulldogs are a very valuable dog breed, and Sean added that he was worried they might be used for puppy farms or sold as Christmas presents.

He later urged the public to keep an eye out for French bulldogs being sold on online.