Irish soldiers who served in WWI honoured at ceremony in Dublin

A CEREMONY was held earlier today in Glasnevin cemetery, Dublin, to mark the 101st anniversary of the signing of the Armistice, and to honour the Irish soldiers who fought in the First World War.

Five Victoria Cross commemorative plaques were unveiled, dedicated to five soldiers from different ranks who showed extreme bravery during the conflict between 1914 and 1918.

More than 40 countries were represented at the service, and officials laid wreaths at the Irish military plot before The Last Post was played and the Irish flag was returned to full mast, according to the Press Association.

A minute's silence was then observed at 11am.

It's estimated that around 200,000 Irish nationals fought in WWI, most of whom served in the British forces. Around 4,000 fought with Australia and around 19,000 fought with Canada. 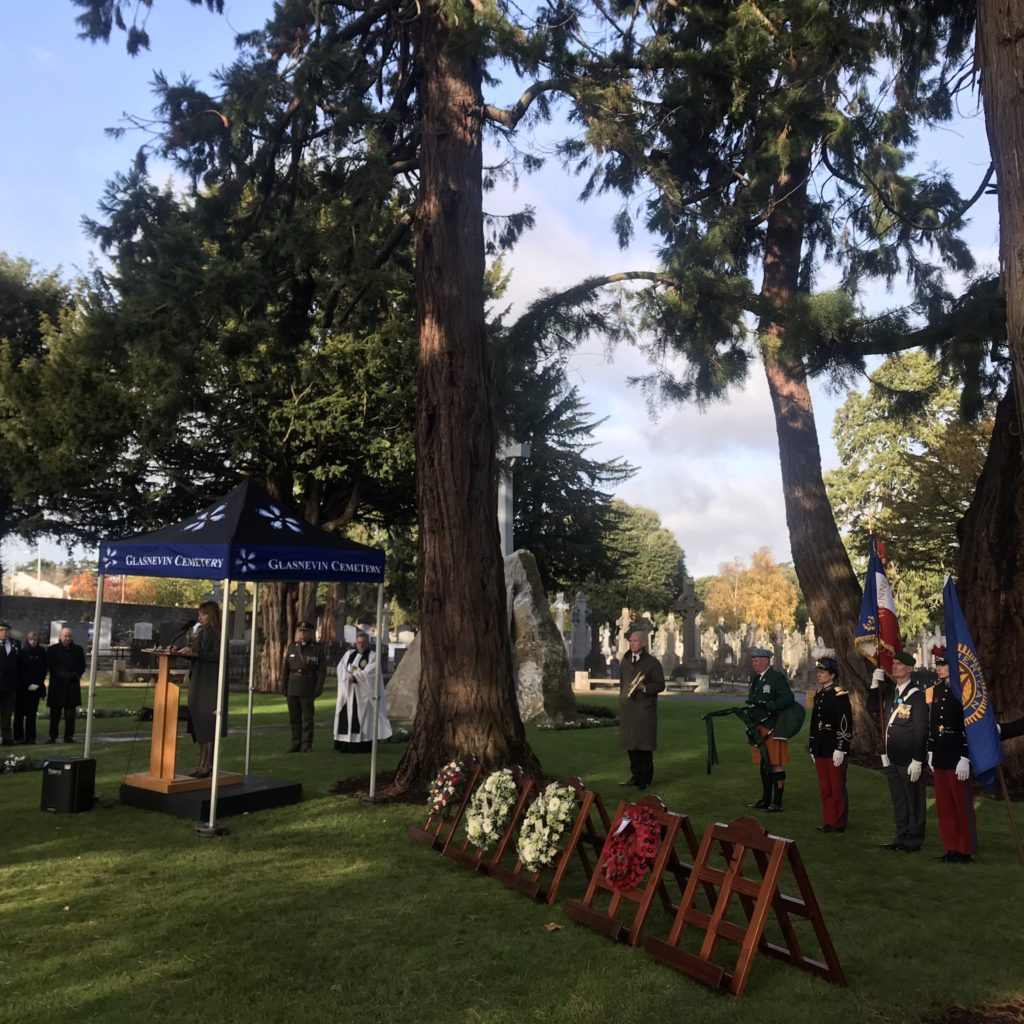 Patrick Meleady was wounded on the battlefield and taken as a prisoner of war. Towards the end of the war he contracted influenza and died in 1919 aged 20.

He was laid to rest in Glasnevin cemetery, where the ceremony took place.

Mr David Bunworth, chairman of Glasnevin Trust, said the annual Armistice Day commemoration  provides an opportunity "to remember the many brave men and women from across the island of Ireland and beyond, who gave their lives in the cause of peace".

He added: "The Cross of Sacrifice under which we laid commemorative wreaths this morning is a lasting tribute of the enormous sacrifices made during this tragic time in our history.

"I hope this annual commemoration acts as a reminder of the importance of peace and reconciliation."

The French ambassador to Ireland, Stephane Crouzat, spoke after the event, saying that France will be forever grateful for the sacrifice made by Irish soldiers who helped them "during the darkest hours of our history."

"By standing in silence here on Armistice Day, I would like to express my gratitude in the name of France to all the brave men and women who sacrificed their lives during the darkest hours of our history," said Mr Crouzat.

"Let us reflect on the words of Marechal Foch, which are inscribed on the French monument at Glasnevin.

"'Some of the flower of Irish chivalry rests in the cemeteries that have been reserved in France, and the French people will always have these reminders of the debt that France owes to Irish valour. We shall always see that the graves of these heroes from across the sea are lovingly tended, and we shall try to ensure that the generations that come after us shall never forget the heroic dead of Ireland'."