AN IRISH MOTHER from Co. Clare has issued a warning to locals after her teenaged daughter was nearly abducted by three men on Sunday evening.

Kerrie Finucane from Kilmihil spoke of how a car approached her daughter Sophie as she was walking up the Cree/Cahermurphy Road in west Clare at 6.30pm on Sunday.

"Three men pulled up beside her in a dark car with tinted windows, and asked her to get in," she told RSVP Live.

"They said they would bring her for a spin, then bring her home and that they wouldn't hurt her.

"She said no but then they grabbed her wrist and tried to pull her into the car. She screamed and they jumped back into the car and drove off."

Kerrie went on to say that she reported the incident to gardai, who were "great".

"Another child might not be so lucky," she added. 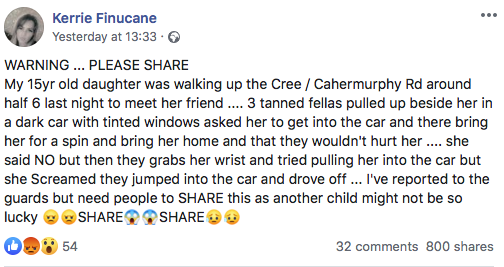 Kerrie later took to Facebook to warn others of the potential threat, and her post has been shared 800 times.

"My 15yr old daughter was walking up the Cree / Cahermurphy Rd around half 6 last night to meet her friend .... 3 tanned fellas pulled up beside her in a dark car with tinted windows asked her to get into the car and there bring her for a spin and bring her home and that they wouldn't hurt her.

"She said NO but then they grabs her wrist and tried pulling her into the car but she Screamed they jumped into the car and drove off ... I've reported to the guards but need people to SHARE this as another child might not be so lucky."