Joe Kennedy blasts Trump's State of the Union: 'Bullies may land a punch... But they never win'

Boston-Irish Kennedy, the grandson of Bobby Kennedy and grand-nephew of JFK, took to the podium to give the Democrats' response to the President's address.

In his speech, labelled 'divisive' and lacking in context by US media, Trump said 'Americans are Dreamers too,' which some remarked as intentionally isolating for immigrants.

Responding from Falls River in his home ground of Massachusetts, Kennedy reflected on the 'fault lines of a fractured country.'

He said: "Many have spent the past year anxious, angry, afraid. We hear the voices of Americans who feel forgotten and forsaken.

"We see an economy that makes stocks soar, investor portfolios bulge and corporate profits climb but fails to give workers their fair share of the reward.

It would be easy to dismiss the past year as chaos. Partisanship. Politics... But it’s far bigger than that.

"A Government that struggles to keep itself open. Russia knee-deep in our democracy.

"An all-out war on environmental protection. A Justice Department rolling back civil rights by the day.

"Hatred and supremacy proudly marching in our streets. Bullets tearing through our classrooms, concerts, and congregations, targeting our safest, sacred places. 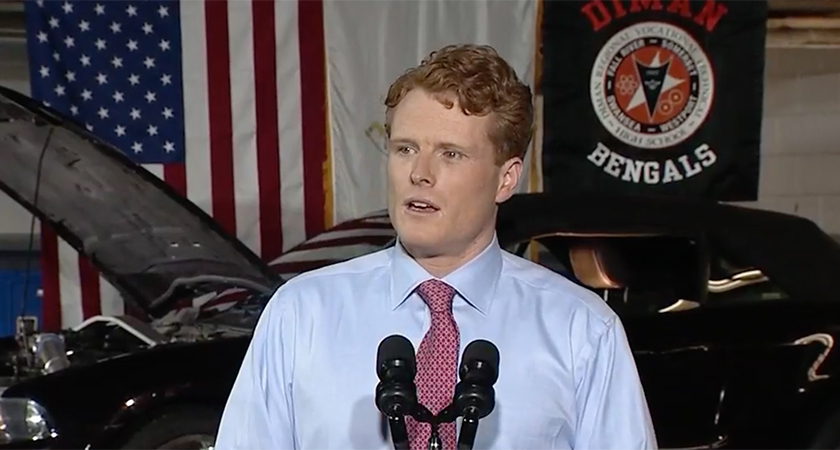 Joe Kennedy addressed the crowd in Falls River, Mass., where he said Democrats would fight for the undocumented minors. (Picture: ABC News)

You are a part of our story. We will fight for you. We will not walk away.

"And that nagging, sinking feeling, no matter your political beliefs: this is not right. This is not who we are.

"It would be easy to dismiss the past year as chaos. Partisanship. Politics," he said. "But it’s far bigger than that."

Speaking directly to the undocumented who came to the US as children - the 'Dreamers' - in both English and Spanish, Kennedy said the Democrats would 'fight for them.'

"Let me be clear: You are a part of our story. We will fight for you. We will not walk away," he said.

In a veiled reference to Trump and the policies of his administration, Kennedy chided: "Bullies may land a punch. They might leave a mark.

"But they have never, not once, in the history of our United States, managed to match the strength and spirit of a people united in defence of their future. 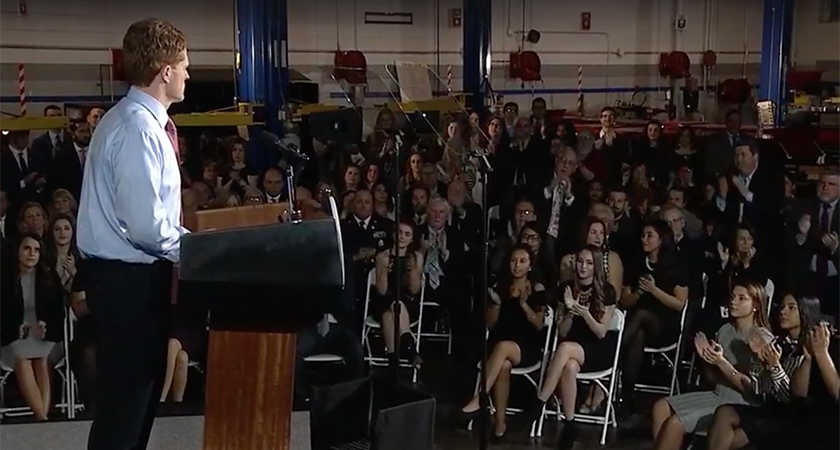 "Let me be clear: You are a part of our story. We will fight for you. We will not walk away," he told the crowd. (Picture: ABC News)

"That is the measure of our character," he said. "That’s who we are."

Kennedy also took aim at the administration's 'targeting of the idea that everyone in the US is worthy of protection.'

"For them, dignity isn’t something you’re born with but something you measure. By your net worth, your celebrity, your headlines, your crowd size.

"Not to mention, the gender of your spouse. The country of your birth. The colour of your skin. The God of your prayers."

He said their stance is 'a rebuke of the American ideal' that everyone is worthy, equal and counts in the eyes of the law, leaders, God and Government.

"That is the American promise. But today that promise is being broken," Kennedy added. "They are turning American life into a zero-sum game."

Kennedy said that under the Trump administration 'in order for one to win, another must lose,' that the country is bombarded with 'false choices' in cutting tax for corporations, but raising it for families, and gutting healthcare in one state to extend it to another.

"Here is the answer Democrats offer tonight: we choose both. We fight for both. Because the strongest, richest, greatest nation in the world shouldn’t leave any one behind."