FIRST MINISTER Designate of the Northern Ireland Executive Michelle O'Neill has said that the people "have spoken and spoken clearly in this election" and that there can be "no excuses and no attempt by the DUP or anyone else" to punish the public now or in the time ahead.

Speaking outside Parliament Buildings yesterday after an historic election saw Sinn Féin win the greatest number of seats in the assembly, O'Neill said the electorate has demanded that parties "get back down to business," which included electing a speaker and getting the Assembly functioning, appointing a First Minister and deputy First Minister and forming a new Executive.

"I have said that this election represents a very significant moment of change," she said.

"This is a defining moment for our politics and all of our people. It presents us all with an opportunity to re-imagine relationships in this society on the basis of fairness, equality and social justice."

She said as First Minister, she intends to "work with those from all political perspectives, through partnership - not division."

"I will provide leadership which is inclusive, which celebrates diversity and which guarantees rights and equality for those who have been excluded, discriminated against and ignored in the past. We want this incoming Assembly to adopt a culture of civility, and mature politics at Stormont and focus on our shared priorities."

O'Neill noted how she was born in Cork but raised in Tyrone, and that she is a "proud Ulster woman".

"And I am very proud of our place on this island, and these islands, which is a rich tapestry of languages, a vast heritage and cultures, including the orange, green and rainbow of cultures, and multiculturalism," she said.

"The scale of what has been accomplished since the advent of the Good Friday Agreement 24 years ago has resulted in the transformation our society, and in particular border communities, but we have much, much more to do in order to prosper and reach our full potential.

"This includes advancing peace and reconciliation, and eradicating the cancer of sectarianism in our society. Our society has suffered. We must heal the wounds of the past."

She said she met with the British Secretary of State and spoke with Taoiseach Micheál Martin, and said that the DUP and British Government must "accept and respect the democratic outcome of this election."

"The responsibility for finding solutions to the Protocol lies with Boris Johnson and the EU, and their conversations should resume, but make no mistake this society and our businesses will not be held to ransom.

"This means applying the Good Friday Agreement in all its parts – An Assembly, Executive, North/South Ministerial Council and East-West structures without delay, and no further interruption." 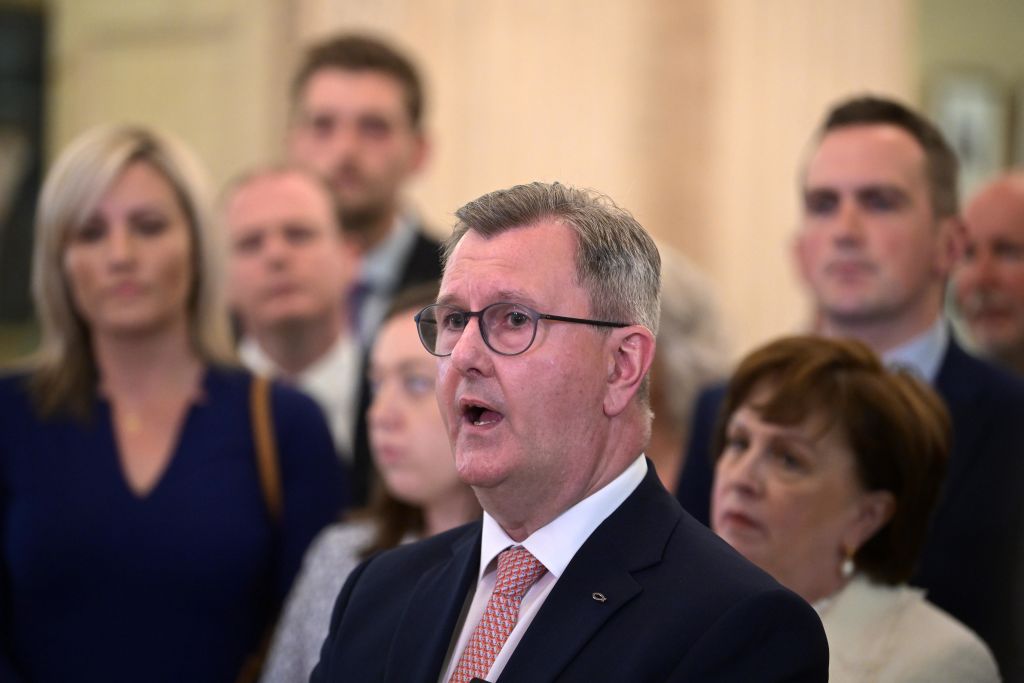 Leader of the DUP Jeffrey Donaldson also led a delegation to meet the Secretary of State for Northern Ireland Brandon Lewis, along with DUP MLAs Edwin Poots and Gordon Lyons and MPs Gavin Robinson and Gregory Campbell.

"Our institutions are not based on majority rule, they are based on consensus and powersharing," he said in a statement. "Progress is only made in Northern Ireland with the support of unionists and nationalists. Unionism has rejected the NI Protocol. No unionist MLA supports it."

He said that with no unionist support, an Executive cannot be formed, and that will only be resolved with the removal of the Irish Sea border.

"The Government has talked tough, but the people who voted on Thursday are not interested in words, they want to see the Government act and defend this part of the United Kingdom and defend the democratic institutions in Stormont.

"No more can anyone stand at the Dispatch Box and argue that the Northern Ireland Protocol is protecting peace and stability in Northern Ireland. The people have spoken.

"Every unionist candidate standing in the election stood in opposition to the protocol and attracted some 360,000 votes. 40% of all votes cast were explicitly for parties who opposed the Protocol. Given that the political institutions in Northern Ireland operate on the basis of cross-community consensus, the lack of any unionist support for the protocol means that it is unworkable as it does not command sufficient consensus."

In a statement following his meetings with leaders of Northern Ireland's five main political parties, including Alliance's Naomi Long, UUP's Doug Beattie and the SDLP's Colum Eastwood, Brandon Lewis reiterated the ned to respect the electoral outcome of Thursday's election.

"Northern Ireland’s party leaders must come together to agree a way forward to deliver a stable and accountable devolved government," he said.

"The UK Government’s overriding priority remains the preservation of peace and stability in Northern Ireland and the protection of the Belfast (Good Friday) Agreement in all its strands. The current situation with the Protocol is fundamentally undermining the Belfast (Good Friday) Agreement and creating an unacceptable situation in Northern Ireland. We will continue to press the EU to agree the crucial changes that are urgently needed but will take nothing off the table in our pursuit of those solutions.

"As I conveyed to party leaders today, our collective focus must be on the restoration of the Stormont institutions so that those newly elected representatives can come together and deliver in the best interests of all the people of Northern Ireland," he finished.

The cross-community Alliance Party. returned 17 MLAs, more than doubling its previous number in 2017.

The Ulster Unionist Party (UUP) lost one MLA to return with nine, while the SDLP's seats fell from 12 to eight.