A DEMOCRATIC Unionist Party (DUP) MP is facing criticism after he described a special gospel edition of the long-running choir TV series Songs of Praise as “the BBC at its BLM (Black Lives Matter) worst”.

East Londonderry MP Gregory Campbell has been accused of “race-baiting” and making “irresponsible” remarks in reaction to a Gospel Singer of the Year edition of the programme.

The episode, which was filmed at Gorton Monastery in Manchester, was fronted by a black presenter and included three judges and five semi-finalist all of black ethnicity.

Writing in a lengthy Facebook post on January 31, the Northern Ireland MP wrote: “Just watched BBC TV Songs of Praise which this week was Gospel Singer of the year semi final. This I'm afraid was BBC at its BLM worst.

“The singers were all very good but can you imagine an all white line up with an all white jury and presented by a white person? No I can't either.” 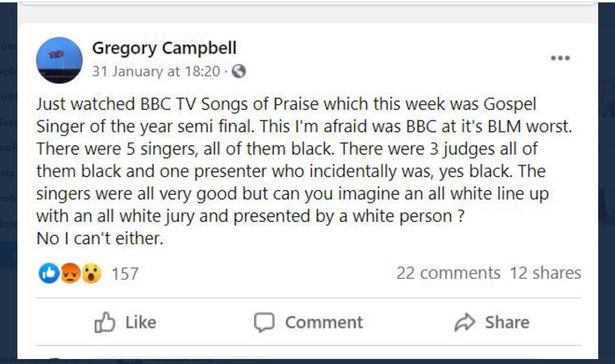 His remarks drew strong condemnation from the North West Migrants Forum who, along with several other organisations based in Northern Ireland, called on the DUP member to “withdraw his ignorant and insulting post” and issue “a full public apology”.

In a statement they said: “It is both astonishing and shocking that Mr Campbell watched this deeply moving edition of Songs of Praise, full of love and praise for God, and saw only skin colour.

“Is he uncomfortable watching a programme where Black British people and culture are celebrated centre-stage? Did he think the BBC was racist when other programmes – night after night, decade after decade – only featured white people?

“We call upon Mr Campbell to provide any evidence that the five singers were there on the basis of anything other than their obvious skills, or that the three judges were selected for their skin colour rather than their expertise.

“Mr Campbell's statement is not a trivial matter; it is deeply irresponsible. It is deeply worrying that Mr Campbell can confidently display such clear bias, apparently without fear of challenge or accountability.

“Given his role as an elected representative and public servant, Mr Campbell's statement cannot go unchallenged; the potential costs are too high.

“Just weeks since the horrific attack on the Belfast Multicultural Association, it is alarming that a political leader thinks it appropriate to use this kind of race-baiting to secure some sort of perceived political advantage, regardless of the consequences.

“Black and ethnic minority people are not ''other''; they are equal citizens in an increasingly diverse country, including in Mr Campbell's constituency.

“He needs to withdraw his ignorant and insulting post and make a full public apology to the Black and minority ethnic community of his constituency and beyond.” 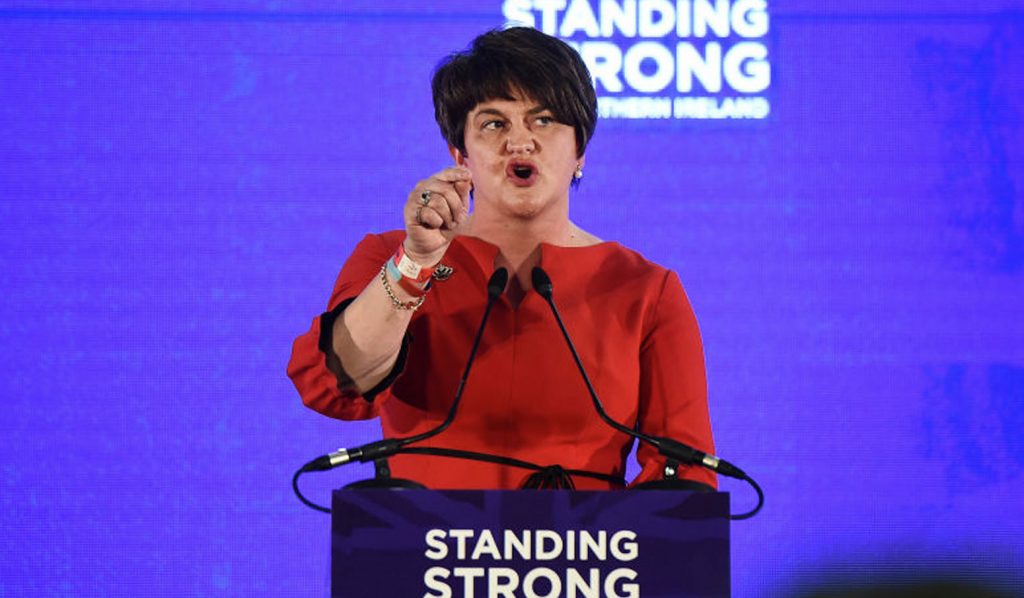 They called on DUP leader to sanction Campbell over his remarks and ensure he is “held accountable for his words”.

The statement added: “As First Minister, Arlene Foster is responsible for advancing this vision. As Mr Campbell's party leader, we expect her to ensure that he is held accountable for his words.

“Failure to do so will mean the words of that Executive vision will ring hollow. Meanwhile, we commit ourselves to challenging racism and building a society that fully respects and celebrates diversity.'   “

Responding to Campbell’s remarks, Sinn Féin MLA Caoimhe Archibald revealed she would be reporting the comments to the House of Commons.

She wrote: “Gregory Campbell's disgraceful comments don't reflect the views of vast majority of the constituents he'd purport to represent.