A NORTHERN Irish Archbishop has pleaded with communities to come forward with information which may lead to finding The Disappeared.

Archbishop of Armagh Eamon Martin was speaking at the Mass for the Disappeared in St Patrick's Church, Armagh, when he appealed to those 'carrying secrets' to confide in trustworthy people to share the information.

Archbishop Martin said there is still "much to be done" to uncover the full story of the Troubles, but those who were involved and victims' families are getting older.

"There is still so much to be done to uncover the truth so that the full stories of what happened during the Troubles can be told; that the dead can rest peacefully in their graves; that the bereaved and injured can find healing; and, that a just and lasting foundation can be put in place on which an honest and shared future can be built for us all," he said.

"Those who were involved and who hold vital clues and information are getting older and some are dying. Memories are fading. The will to engage is perhaps waning.

"Family members of victims are themselves getting older. Some have already gone to their rest; others have grown frail and are no longer able to join us here.

"But the unanswered questions do not disappear with death. They linger on, as a constant nagging reminder to the next generation of unfinished business, of a grief that is unsatisfied with silence, a pain that does not go away but lies beneath, an unhealed wound that is passed on from children to grandchildren," Archbishop Martin added.

"In some cases," he continued, "they pulled the trigger, planted the bomb, blindly followed orders or gave the command for death or punishment.

"All across this island, in Britain and beyond, there are people on all sides who carry secrets – memories of their own involvement in the deaths and injury of thousands of men, women and children.

"These were awful, terrible times.  Shocking and horrific things happened.  There must be so many people walking around today who know in their hearts that the information that they have locked down inside them is capable of unlocking the uncertainty and grief of families." 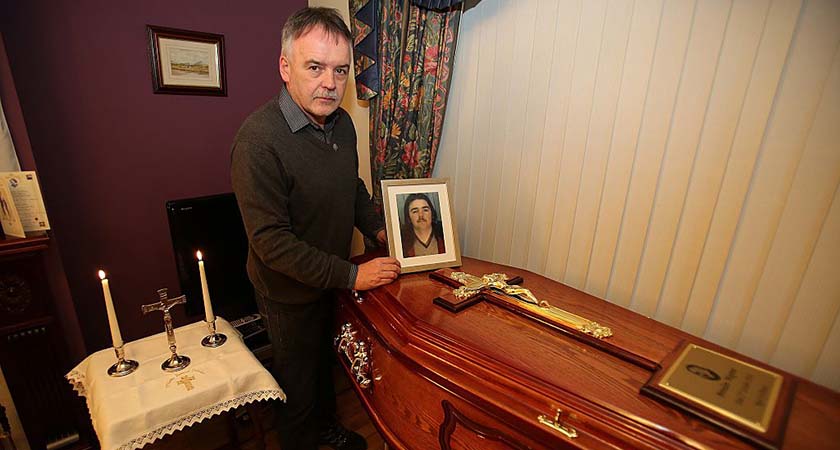 Kieran Megraw, the brother of IRA victim and one of the 'Disappeared' Brendan Megraw, poses with the coffin of his brother and a photograph after his remains were brought to his home in west Belfast in 2014 following their discovery in bog over 30 years after his murder. (Picture: Paul Faith/AFP/Getty Images)

Archbishop Martin then appealed to those who have information to confide in those in society and in the Church who could share the information.

"We need to find a mechanism of truth and information retrieval which will allow more of these people to come forward so that many more families can be set free from the agony of waiting and wondering, “why?”

"Even in the absence of a formal mechanism, I am confident that there are trustworthy people in society and in the Churches who would be willing, and could be empowered and enabled, to accept and sensitively share information in this regard."

The Mass for the Disappeared occurs annually on Palm Sunday and is offered for the 16 'disappeared' victims of the Troubles.

Of the 16 victims, the remains of 10 victims have been found to date through information submitted anonymously to the Independent Commission for the Location of Victims Remains.

The Provisional IRA admitted responsibility for 13 of the 16, while one was admitted by the INLA.

No attribution has been given to the remaining two.

Note: This article has been amended at 10am on April 12 to correct an image of Archbishop Martin.