A PETITION to have a street in Cork renamed in honour of 19th Century abolitionist and former slave Frederick Douglass has been launched.

Organisers are calling on Cork City Council to change the name of one of the many streets in Cork bearing the moniker of a British royal or members of the colonial administration.

The petition argues that by then renaming said street after Douglass, Cork would send a message of support for the Black Lives Matter protests sweeping the globe.

“Cork is a vibrant and increasingly diverse city with a rich and complex history,” the Change.org petition states.

“Given our city’s past as both an economic beneficiary of the slave trade and a centre for abolitionist activism, we feel it is time for our City Council to accord due recognition to the freed slave and hero of the anti-slavery cause, Frederick Douglass.

“In 1845, Douglass spent three weeks in Cork giving numerous public speeches against slavery. The naming of a street for Frederick Douglass would be a powerful symbol of the city’s commitment to the struggle against racism and embrace of all its citizens, regardless of national origin, creed and colour.

“Our city is home to many streets named for members of the British royal family and the colonial administration in Ireland. Let’s make room for an internationally renowned hero of the anti-racist cause with a clear connection to our city. Now is the time for a Frederick Douglass Street in Cork.” 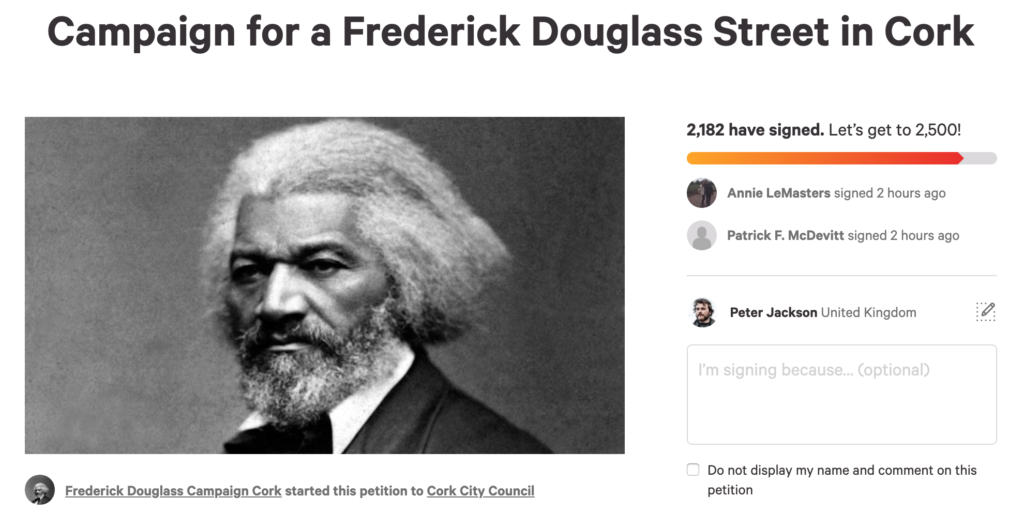 Douglass famously visited Cork in 1845 as part of a tour of Ireland that saw him make several notable speeches voicing his opposition to slavery.

His incredible story began in Maryland back in the early 1800s.

Born into slavery, at the age of 20 he escaped captivity and eventually found his way to an abolitionist slave house in New York City.

From there he went on to become the leader of the abolitionist movement in Massachusetts and New York, regularly campaigning against slavery and segregation in America.

He spent a total of two years travelling around the UK and Ireland, during which time he met and befriended fellow anti-slavery campaigner and Irishman Daniel O'Connell.

Douglass was particularly fond of Ireland, noting the country's lack of prejudice and racial discrimination.

So far, 2,182 people have signed the petition, with an initial target of 2,500 signatures set.