ROME, ITALY - MARCH 05: Pope Francis waves as he departs for his trip to Iraq from Leonardo Da Vinci airport on March 05, 2021 in Rome, Italy. Although the trip is seen as an act of solidarity, the Vatican has been forced to defend the decision to go ahead with the papal visit amid the ongoing coronavirus pandemic, as Iraq is currently seeing a spike in infection rates as it faces a deadly second wave of the virus. (Photo by Franco Origlia/Getty Images)

POPE FRANCIS has arrived in Iraq for the first ever papal visit to the war-torn middle eastern country, and his first international trip since the coronavirus pandemic began.

Stepping off the plane at Baghdad airport, the 84-year-old pontiff was met by throngs of Iraqi well-wishers who flocked to greet him upon his arrival.

Among them was Iraqi Prime Minister Mustafa al-Kadhimi, who extended a warm welcome to the Vatican’s head of state.

Francis insisted that he was "duty bound" to make what will be his riskiest journey to date – considering the pandemic and security concerns – to try to reassure Iraq’s dwindling Christian community through fostering much needed inter-religious dialogue and meeting with Iraq's most revered Shia Muslim cleric. 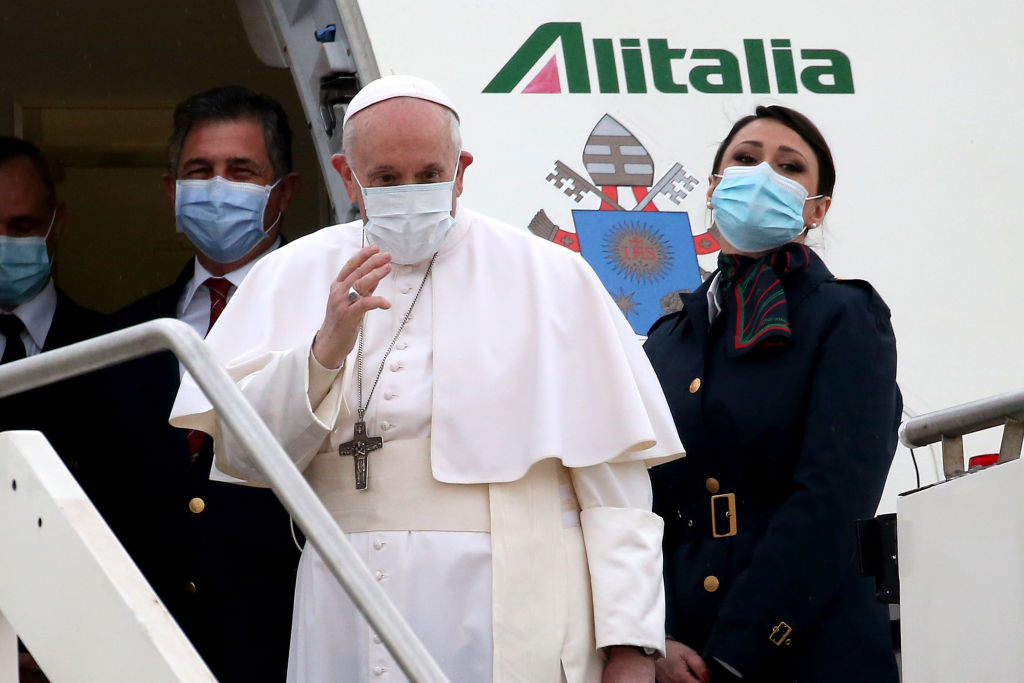 ROME, ITALY - MARCH 05: Pope Francis waves as he departs for his trip to Iraq from Leonardo Da Vinci airport on March 05, 2021 in Rome, Italy. Pope Francis will start the historic first ever papal visit to Iraq. Iraq is currently seeing a spike in infection rates as it faces a deadly second wave of the virus. (Photo by Franco Origlia/Getty Images)

On the plane, the pope told a BBC journalist that he was glad to be travelling again, adding: "This is an emblematic trip and it is a duty towards a land that has been martyred for so many years."

Previously, he had remarked that Iraqi Christians could not be "let down for a second time", following Pope John Paul II’s cancelled trip in 1999 after talks with the dictator Saddam Hussein's regime broke down.

Around 10,000 Iraqi Security Forces personnel are being dispatched to protect the holy father during his visit, while 24-hour curfews are also being enforced to limit the spread of Covid-19.

Pope Francis said that he comes as a "pilgrim of peace” to one of the world's oldest Christian communities – whose numbers have plummeted from 1.4 million to about 250,000, less than 1% of the Iraqi population.

Many have fled to escape the chaos that has gripped the country – once the cradle of civilisation – since the 2003 US-led invasion that ousted Saddam. Christians also fled to escape the clutches of the so-called Islamic State terrorist group, whose militants overran northern Iraq in 2014, destroying historic churches, seizing property, and giving its Christian minority the grim choice of paying a tax to live on Muslim soil, converting, leaving, or execution. 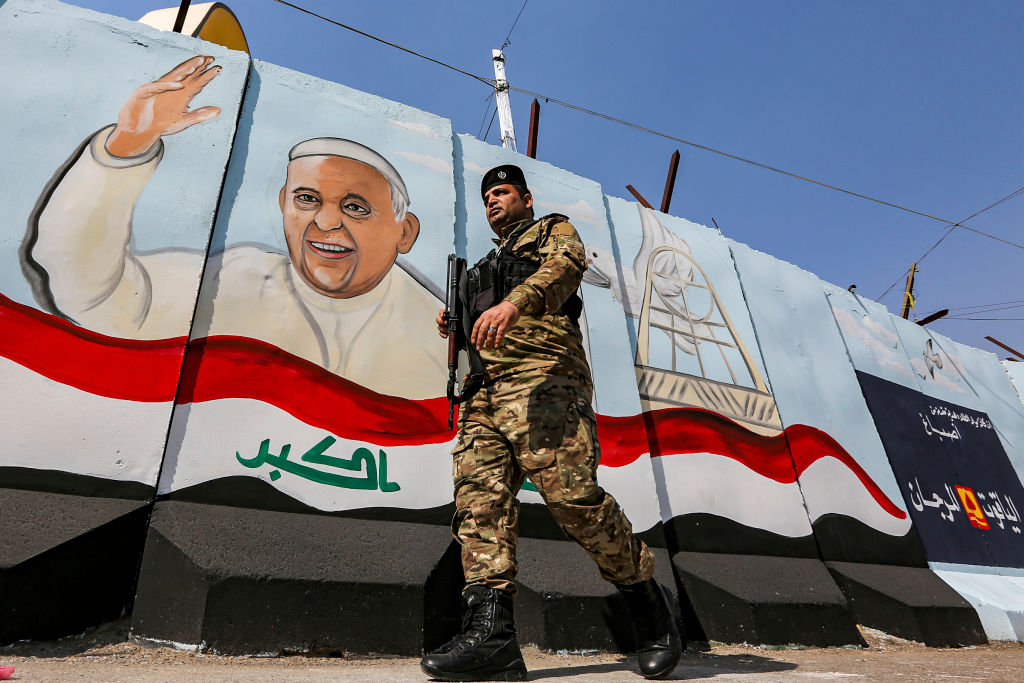 A member of the Iraqi forces walks past a mural depicting Pope Francis waving next to an Iraqi national flag drawn on a blast wall outside the Syriac Catholic Church of Our Lady of Deliverance in the Karrada district of Iraq's capital Baghdad on March 1, 2021 amidst preparations ahead of the pontiff's visit. (Photo by Sabah ARAR / AFP) (Photo by SABAH ARAR/AFP via Getty Images)

By embarking on the historic visit, the head of the Roman Catholic Church aims to embolden persecuted Christians and lay the foundations for a future peace in meetings with religious and political leaders, reports the BBC's Mark Lowen, who is travelling with him.

Addressing the Iraqi people in a video message ahead of his trip, Pope Francis said he was "coming as a pilgrim, as a penitent pilgrim, to implore from the Lord forgiveness and reconciliation after years of war and terrorism".

He continued: "I am coming among you also as a pilgrim of peace... seeking fraternity and prompted by the desire to pray together and to walk together, also with our brothers and sisters of other religious traditions, in the steps of Father Abraham, who joins in one family Muslims, Jews and Christians."

Ahead of the visit, Christians, who have fled their homes since IS invaded the Nineveh Plain in 2014, pleaded with the Pope to help them.

Alla Hana Shaba told the Rudow network: "We want the Pope to help the displaced find a place to settle. We have lost our houses and money."

Another Christian from the north, Saad al-Rassam, told AFP: "We're hoping the Pope will explain to the government that it needs to help its people. We have suffered so much, we need the support."