Queen Elizabeth II and President of Ireland Michael D Higgins at Windsor Castle on April 8, 2014 in England. This is the first official visit by the head of state of the Irish Republic to the United Kingdom.

PRESIDENT Michael D Higgins and his wife Sabina have been met by Britain's Queen Elizabeth II and Prince Philip at Windsor Castle on the first day of his official State visit to Britain.

The President and his wife were given a spectacular ceremonial welcome as they arrived in Windsor for the first day of the first ever Irish State visit to Britain.

A moment of levity amidst the formality came as the Irish President presented a new coat to Irish wolfhound Domhnall of Shantamon, the mascot of the 1stBattalion Irish Guards.

Assisted by his handler, drummer David Steed, Domhnall the wolfhound donned his new coat as he led the band of the Irish Guards and troops on parade. 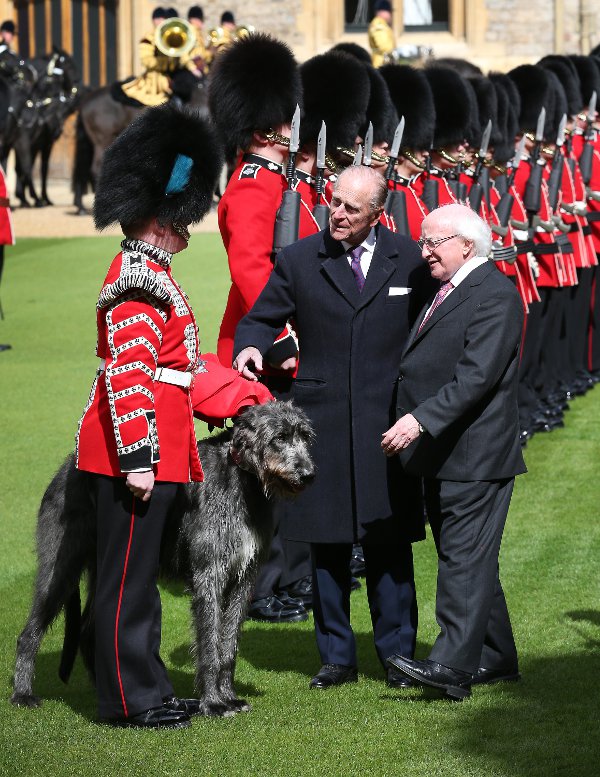 A spokesperson for the MoD said the significance of the new coat dates back to the World War 1 when soldiers from the Irish Guards spotted a wolfhound from another Irish regiment shivering in one of the trenches. “They had a spare coat which they put on the dog and apparently it was never returned – the presentation of new colours is representative of that story.”

More than 850 British Army personnel and 275 horses were also involved in greeting the President.

Horses and cavalrymen dressed in plumed helmets and silver breastplates rode horses born and bred in Ireland while accompanying the Queen as Sovereign’s Escort.

Captain Paul Chishick of the Life Guards who rode the Princess Royal’s horse, Elizabeth said: “Escorting her Majesty on a state visit is a very special privilege…All the soldiers of the regiment have worked tremendously hard to ensure that the occasion was memorable and went according to plan.”

The visit began when the Queen and the Duke of Edinburgh welcomed the President at Windsor & Eton Riverside railway station. 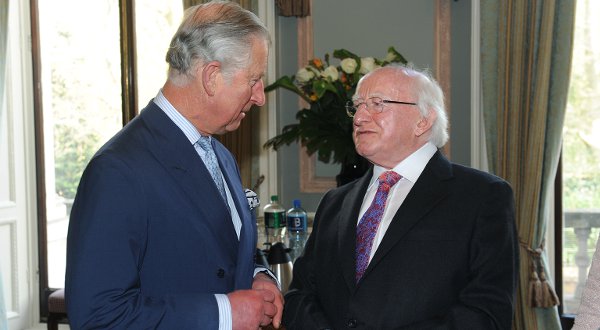 As the President stepped into the royal pavilion in Datchet Road, a 21 gun royal salute was fired, while simultaneously a 41 gun salute was fired at the Tower of London.

The President was driven in a ceremonial carriage procession through the cheering crowds waving both Irish tricolour and Union flags to Windsor Castle, where the Grenadier Guards, one of the oldest and most senior regiments of British Foot Guards, provided a guard of honour.

The President inspected the troops in the quadrangle as the band of the Irish Guards played a selection of Irish and popular melodies.

For the Irish Guards, who recruit from both Northern and Southern Ireland, today’s visit was of special significance.

Earlier, the President and Sabina made an early visit to the Irish Embassy in London where they met Prince Charles and Camilla.

This afternoon, he will visit Westminster Abbey and the Palace of Westminster, where he will make an address, before returning to Windsor for a meeting with Labour leader Ed Miliband and a State banquet.