RYANAIR have banned a passenger for life who allegedly punched a stewardess before his flight from Portugal took off for Stansted Airport.

The man, Rafik Boutiche, was subsequently dragged off the flight by Portuguese police officers and returned to the airport terminal in Faro. 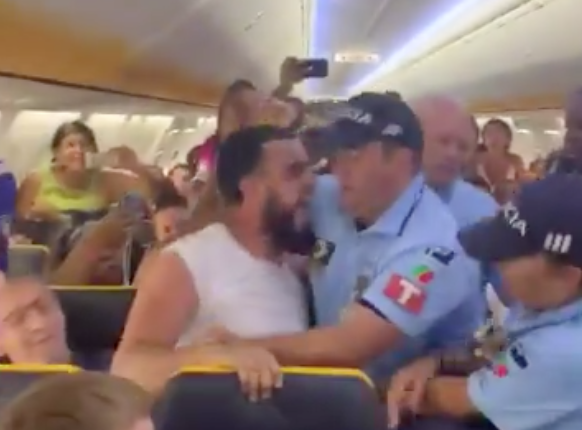 The incident allegedly occurred on Wednesday after Boutiche had attempted to move to a spare seat next to his friend, before coming to blows with cabin crew about it.

The 20-year-old denies punching a stewardess and claims that he was left injured following the altercation, citing damage to his hand, ankle and neck.

Boutiche’s friend filmed the incident and posted the footage on Twitter. In the video, police officers can be seen forcibly trying to drag Boutiche from his seat, while others around him can be heard shouting: “You’re hurting him”.

I can’t believe my eyes right now, my boy was racially profiled and attacked on our flight on our way home ; there was a free seat next to me but the air hostess refused to let him sit there and accused him of punching her when the whole plane has his side. @Ryanair #justice pic.twitter.com/uaI9L3bn9z

Today Ryanair have reportedly banned Boutiche for life for his “disruptive behaviour” on the flight yesterday.

In a video posted by Boutiche himself of the altercation, fellow passengers can be heard telling police officers that “he didn’t punch anyone.”

To think that what just happened to us is still happening in 2019 is DISGUSTING. This is not the first time @Ryanair have messed up. Please help me boycott them and sort this out. #justice pic.twitter.com/o5IV9gQXoA

The two men, from London, eventually left the plane and returned to their hotel to try and book another flight home - not with Ryanair, though.

Speaking to the Mirror, Mr Boutiche said: “My hand is cut up, it’s burning me at the moment. My ankle has been sprained and my neck is hurting me.

“We’re just two young lads, we’re not looking for trouble, we just wanted to get back home.

“I’ve never experienced anything like this, I never thought it was possible to go through what I’ve gone through. It’s made me very emotional.

Speaking of the incident, his friend Islam Fessih said: “There was a free seat next to me but the air hostess refused to let him sit there and accused him of punching her when the whole plane has his side.

“His bag is literally ripped and he is injured. This is so not called for,” he added.