SAJID JAVID has been named Chancellor, less than two years after praising the “active, positive role” of the Irish population in the UKat the 2017 Irish Post Awards.

A former managing director at Deutsche Bank AG, he will be tasked with managing the economy through Brexit and has made history as the first ethnic minority minister to run the Treasury.

A self-proclaimed ally of the Irish community abroad, Javid praised the impact of the Irish diaspora during his keynote speech at the November 2017 Irish Post Awards.

“Britain would not be the country it is today without its Irish population who continue to play an active, positive role in British life,” he said at the gala event.

Mr Javid went on to pay tribute to the culture of the Irish community on the night, describing it as a “shining example of how a community can be integrated, while still celebrating its heritage”.

Furthermore, he said that the Irish in Britain are “showing the way for every other minority group in this country”.

Born in Rochdale and raised in Bristol as the son of a bus driver, the 48-year-old built a successful career in business and finance.

Aged 25, he became a Vice President at Chase Manhattan Bank.

He later moved to Deutsche Bank in London to help build its business in emerging market countries.

He left Deutsche Bank as a Senior Managing Director in the summer of 2009.

In 2010, he was elected Member of Parliament for the Midlands town of Bromsgrove. As an MP, he was a member of the Work and Pensions Select Committee from June to November 2010. 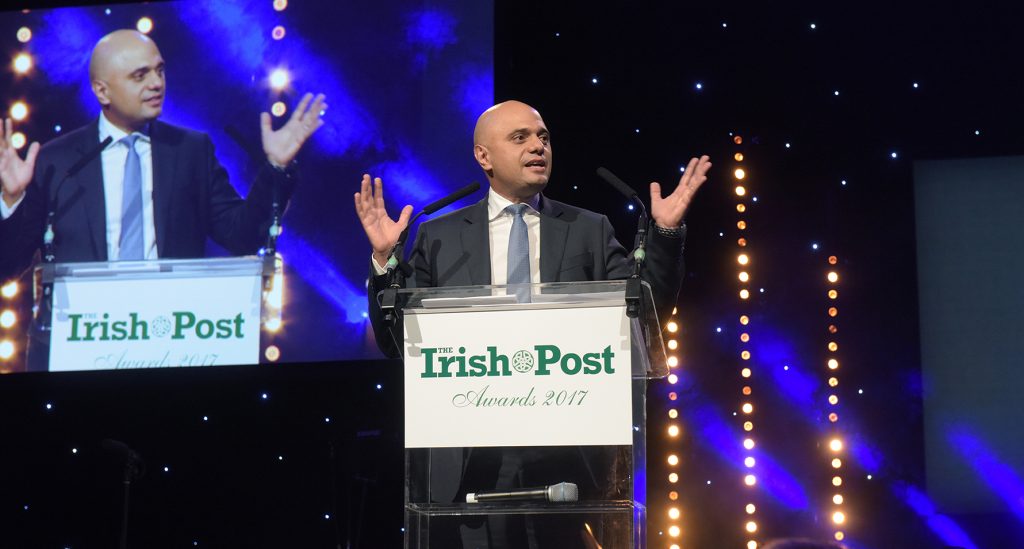 The new Home Secretary praised the Irish for their (Picture: Malcolm McNally)

From July 2016, he served as Secretary of State for Communities and Local Government and the Ministerial Champion for the Midlands Engine before moving on to the role of home secretary in April 2018.

Mr Javid, who comes from a Muslim background but does not practise any religion, is married to Laura Javid and they are parents of four children, Sophia, Rania, Maya and Suli.

Plans for bridge between Northern Ireland and Scotland to be scraped