TAOISEACH MICHEAL Martin has paid tribute to six-year-old Adam King in a touching letter sent to the Cork youngster.

Adam became an overnight celebrity in Ireland and much of the watching world after appearing on the Late Late Toy Show alongside host Ryan Tubridy.

In a segment that tugged on the heartstrings, Adam told Ryan how, despite living with a medical condition that has left him with brittle bones, he has set his sights on working for NASA as part of the US space agency’s ground crew.

The segment also saw Adam hold up his special homemade “virtual hug” that he shows to everyone he has met during the Covid-19 pandemic.

Adam’s positive outlook and determination sparked an outpouring of emotion online with both NASA and astronaut Chris Hadfield reaching out to encourage the youngster to follow his dream.

Martin was among those to learn about Adam’s story and decided to reach out with a special letter paying tribute to the six-year-old has inspired so many across Ireland – including the Taoiseach himself. 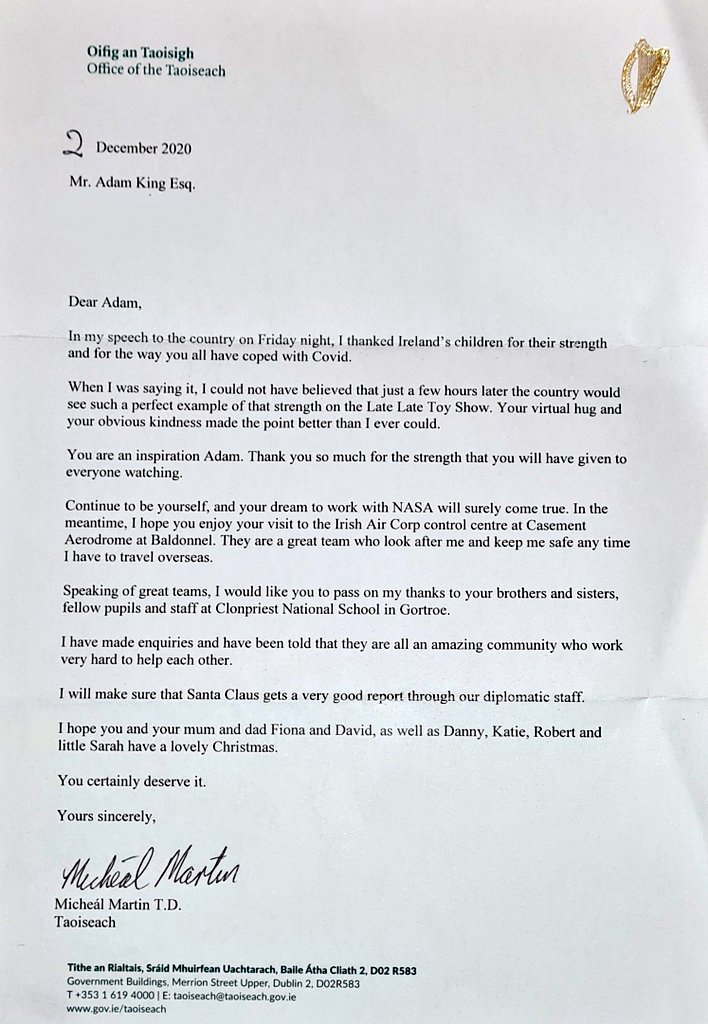 The reads: “In my speech to the country on Friday night, I thanked Ireland’s children for their strength and for the way you all have coped with Covid

“When I was saying it, I could not have believed that just a few hours later the country would see such a perfect example of that strength on The Late Late Toy Show.

“Your virtual hug and your obvious kindness made the point better than I ever could.

“You are an inspiration Adam. Thank you so much for the strength that you will have given to everyone watching.”

“Continue to be yourself and your dreams to work with NASA will surely come true”.

“In the meantime, I hope you enjoy your visit to the Irish Air Corps Control Centre at the Casement Aerodrome at Baldonnel. They are a great team who look after me and keep me safe anytime I travel overseas.

The Taoiseach continued: “I have made enquiries and have been told that they are all an amazing community who work very hard to help each other.

“I will make sure that Santa Claus gets a very good report through our diplomatic staff.”

“I hope you, your mum and dad Fiona and David, as well as Danny, Katie, Robert and little Sarah have a lovely Christmas. You certainly deserve it.”

Thank you SO MUCH to our Taoiseach @MichealMartinTD for the lovely letter he sent to Adam! The kindest words and the highest of honours. The whole family were very proud and humbled to receive it #virtualhug #adamsvirtualhug pic.twitter.com/HwDBMCoHsp

Adam’s family shared the letter sent to them by the Taoiseach on social media alongside a message thanking him for his kind words.

"Thank you SO MUCH to our Taoiseach @MichealMartinTD for the lovely letter he sent to Adam!

“The kindest words and the highest of honours. The whole family were very proud and humbled to receive it.”