DUBLIN, IRELAND - MARCH 29: A passenger is escorted to a bus to be taken to the Crowne Plaza hotel for quarantine on March 29, 2021 in Dublin, Ireland. Last week, Ireland started requiring travelers from 33 high-risk countries to be shuttled to a mandatory 12-day hotel quarantine. (Photo by Donall Farmer/Getty Images)

A FURTHER 43 'high risk' countries have been tipped to be affected by Ireland's mandatory hotel quarantine scheme in the coming weeks.

According to The Irish Independent, countries including the United States, France, Germany and Italy are among 43 countries which are designated as 'high risk' due to a surge in Covid-19 cases or the identification of new variants of the virus.

Currently, passengers from 33 countries must quarantine for 12 days at one of a number of designated hotels upon their arrival from Ireland. This list will more than double should the recommendation be accepted by the government.

The Travel Expert Advisory Group has recommended that all countries with an incidence rate higher than 500 per 100,000 people should be added to the mandatory quarantine scheme, which was launched in Ireland last Friday 26 March. 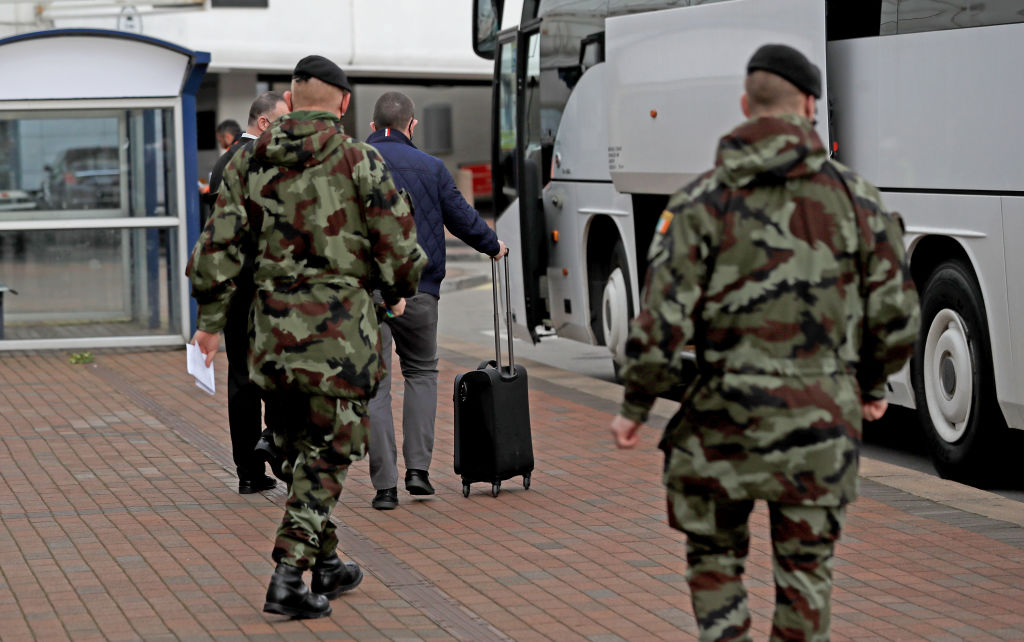 DUBLIN, IRELAND - MARCH 29: A passenger is escorted to a bus to be taken to the Crowne Plaza hotel for quarantine on March 29, 2021 in Dublin, Ireland. Last week, Ireland started requiring travelers from 33 high-risk countries to be shuttled to a mandatory 12-day hotel quarantine.(Photo by Donall Farmer/Getty Images)

As of now, Austria is the only European country affected by Ireland's mandatory quarantine, with African and South American countries making up most of the list--this could change in the coming weeks, with The Irish Independent reporting that the new list could cause a 'strain' in relations with key countries.

The Department of Health is in discussion with the Department of Foreign Affairs regarding the new list, and Irish embassies across the globe will have to advise its citizens and develop new travel advice.

The Irish government is expected to reassure countries on the new list that the quarantine scheme is temporary and will change as the situation in the countries improves, however it is expected to have a detrimental effect on businesses as there is no exemption for those travelling to Ireland for work reasons.

A decision is expected to be made by the government later this week.

The United Kingdom is not on the new list of 43 'high risk' countries.