A VEGAN diner has been left “angry and upset” after discovering a rude handwritten note scrawled on a piece of paper inside a restaurant’s menu.

At the time, she had thought little of her request to know more about the menu options that are suitable for vegans.

However, her meal out was ruined when a copy of the menu returned with all of the vegan options circled and a rude message scrawled on a scrap of paper.

According to Edinburgh Live, Cooney only noticed the note when it fell out of the menu.

Upon closer inspection, however, she realised it had been written by the chef and contained a rather unpleasant message that read: “The vegan sh*** has been circled.”

“I dined today for lunch with family who are visiting for the weekend,” she told Edinburgh Live.

“I asked what options were vegan and the barman said he would ask the chef, he came back with the menu which had the items circled and he put the note on the bar, it fell from the bar and my dad picked it up and showed it to me.

“When I first read it I was in disbelief, then I was angry and upset, it’s insulting and so unprofessional, also the total disregard for any potential allergy is a worry. 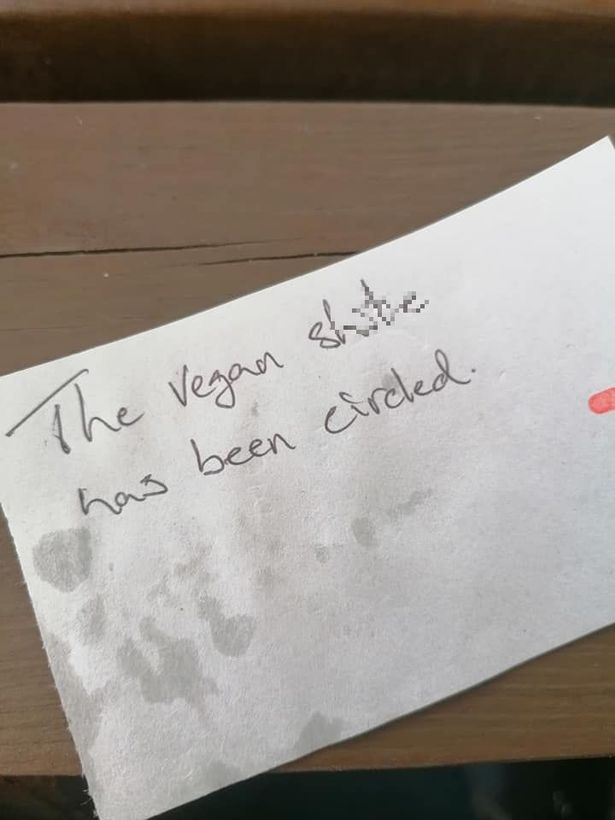 “For a chef to have that mentality is quite shocking.

“I went and spoke to the manager after my family had finished their meal, he apologised and agreed the note wasn’t acceptable,” she added.

“For a chef to have that mentality is quite shocking.”

Cooney complained to the restaurant’s manager over the issue and received an apology.