FOOTAGE has emerged of a number of men being viciously attacked with a hatchet after a fight broke out between two gangs on the streets of Dublin.

One man, suspected of receiving a hatchet wound to the back of the head, is being treated for a fractured skull and three stab wounds.

Another young man is being treated for a severe cut to the rear of his head, while a third suffered a punctured lung after being stabbed.

The horrific video was captured at the intersection of Creighton Street and Hanover Street in Dublin 2.

A number of people can be seen running in the road before a fight breaks out between the young men.

Someone can be heard shouting "hit him with the hatchet," as a brawl breaks out. 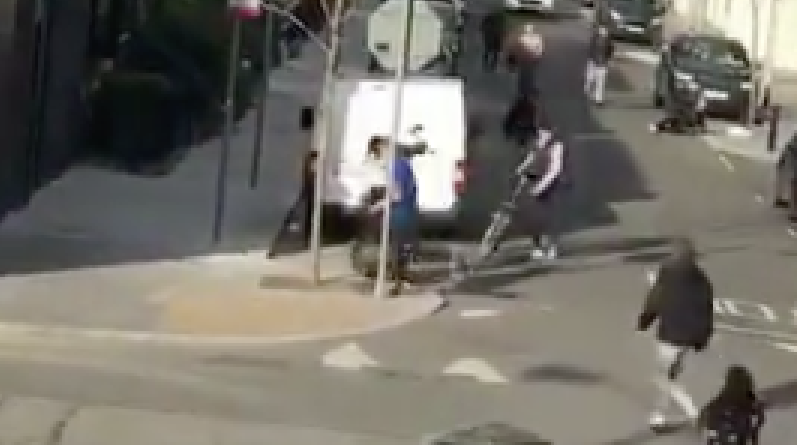 More gang members come flooding in, kicking and throwing punches at the men involved in the scuffle.

A man holding what appears to be a hatchet-like object can be seen swinging it at a man a number of times as he lies on the floor, while another man can be seen throwing a bicycle.

Gardaí were called to the scene and are now investigating the incident.

No arrests have been made as of yet, but the brawl was thought to involve around 12 young men.

"Gardaí are currently at the scene of an incident that occurred in the Creighton Street area of Dublin 2 on 03/11/2020 at approximately 2pm," a Garda spokesman said.

"It is reported that an altercation occurred between a group of youths.

"No further information is available at this time. Investigations are ongoing."

A man has been seriously injured in a vicious hatchet attack after a fight between two gangs in Dublin city this afternoon.
Gardai were called to the scene this afternoon at the intersection of Creighton Street and Hanover Street in Dublin 2. pic.twitter.com/xVQ8z2wTYW