KATIE-GEORGE Dunlevy and Eve McCrystal secured another Gold medal for Ireland at the Tokyo 2020 Paralympics this morning after victory in the Women's Road Race B event.

The tandem cyclists made it three medals from the Tokyo Games, adding to their time trial gold and individual pursuit silver medals, with victory on Friday.

It's their fifth Paralympic medal in total after a time trial gold and road race silver from Rio in 2016.

During a tense race this morning, the pair finished with a time of 2.35.53 at the Fuji International Speedway, pipping the British and Swedish teams to the post while overcoming difficult conditions on a rain-soaked track.

"The road race is my favourite and I've always wanted to win that at the Paralympics," Dunlevy told RTÉ.

"In London, I was fifth in the road race, and then I got silver in Rio. To win it in Tokyo is a dream come true.

"It was a really challenging race. The Swedish were really technically very good and on the downhills we were losing ground to them. If they went ahead of us we had to use a lot of effort to get it back.

"It was a lot of on-off efforts and it was really draining as the laps went on. 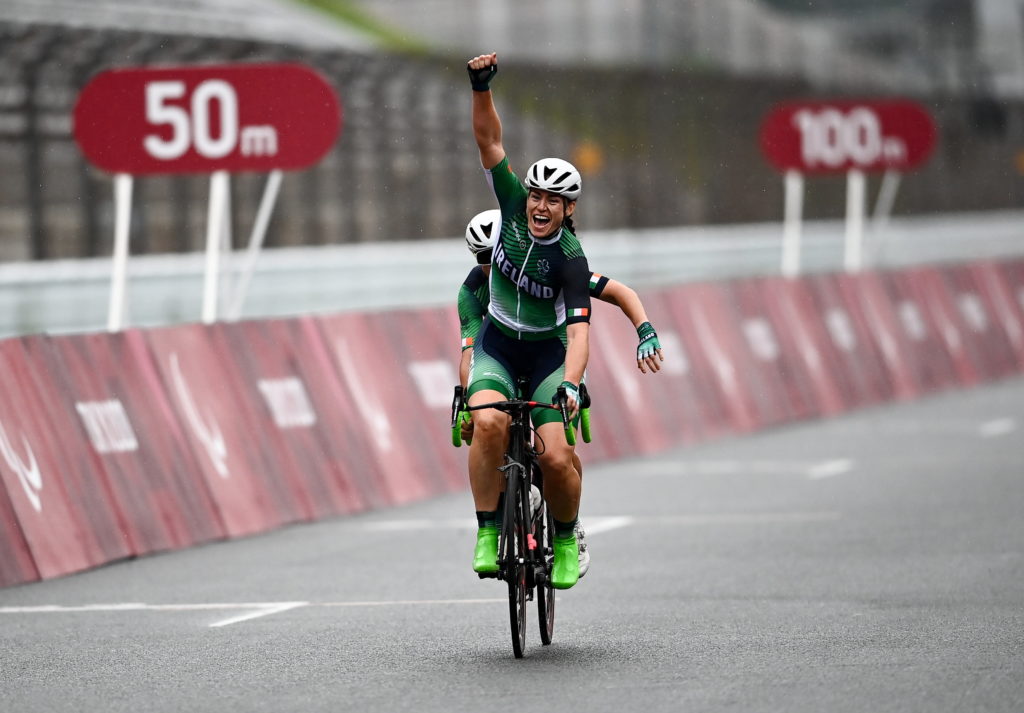 Tokyo , Japan - 3 September 2021; Eve McCrystal, pilot, and Katie George Dunlevy, stoker, of Ireland celebrate winning gold as they cross the line in the Women's B road race at the Fuji International Speedway on day ten during the 2020 Tokyo Summer Olympic Games in Shizuoka, Japan. (Photo By David Fitzgerald/Sportsfile via Getty Images)

"There was a chance there and we just had to take it. That was to attack really on that last climb coming in. We did, and we got a gap, and I just can't believe it held off to the line.

"I was fading off quickly though!"

McCrystal added: "I can't believe it because as a pilot I found that course so stressful in the rain.

"As Katie said we were losing ground on the descent. The climb I found tough because of the on-off during the race.

"I just said to Katie with about 2km to that we're going to have to kick the last little drag up. Because the British bike are the current world champions. I didn't want to take them to the line so we had to chance it.

"We chanced it, we got a gap, and we just went for it and I cannot believe we did that.

"I didn't really feel the rain too much. I was just concentrating on staying upright and the Swedish girls really put it to us on the corners.