THE four young men who died in a horror car crash in Co. Donegal last night have been named locally.

Mícheál Roarty (24) from Dunlewey, John Harley (24) from Falcarragh, Sean Harkin (22) from Falcarragh and Daniel Scott (early 20s) from Gortahork died in a single-vehicle collision at Gleannhulaigh near Magheraroarty on Sunday night.

The four friends were travelling in a Toyota Corolla which crashed at a bridge near Meenaclady between Gaoth Dobhair and Gortahork shortly before 9pm.

Gardaí and emergency services attended the scene but all four men were pronounced dead before they could be transported to hospital.

The scene of the tragedy remained sealed off this afternoon as Garda forensic collision investigators began the painstaking task of determining the cause of the crash.

"It was a tragic scene," Garda Superintendent David Kelly said. 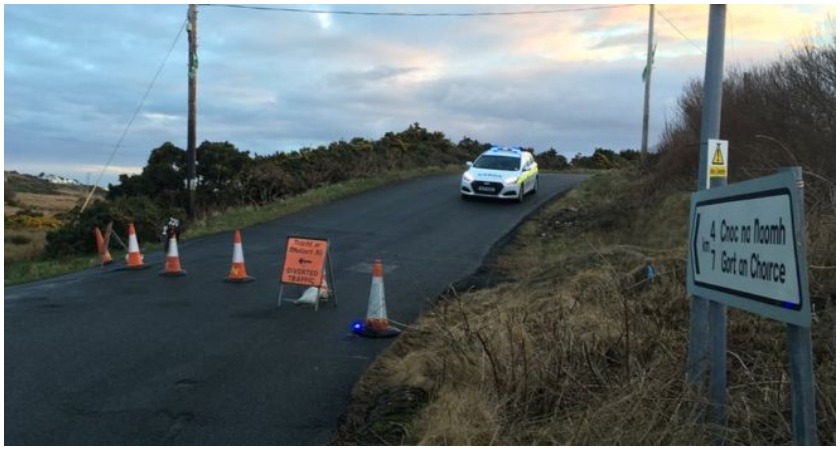 The crash occurred near a bridge between Gaoth Dobhair and Gortahork (Image: Twitter)

"Family members arrived and so there was good work done by all the emergency services in difficult conditions."

Tributes have been flooding in since the tragedy occurred.

Gweedore Parish priest Fr Brian Ó’Fearraigh attended the scene after receiving a call at around 9pm informing him of the horror car crash.

"It really was the stuff of nightmares. It makes no earthly sense whatsoever. All I could do was say a few prayers," he said this morning.

"Nothing can prepare anyone for what we witnessed last night. It is everyone's worst nightmare."

The Mayor of Donegal, Falcarragh-based Councillor Seamus Ó Domhnaill, said: “It’s devastating for four young lives to be taken so quickly and so tragically.

"It will leave an awful dark, black cloud over West Donegal and one that won't go away too easily.”

Gardaí investigating the incident are appealing for witnesses or anyone with information to contact Milford Garda Station on 074 915 3060, the Garda Confidential Line on 1800 666 111 or any Garda station.