GARDAÍ and UK police have issued a new appeal for information regarding five letter bombs that were mailed to Britain from Ireland in March.

A fourth package was found at the University of Glasgow a day later, and a fifth package posted to London was returned to the Limerick Postal Centre on March 22.

None of the devices detonated and no one was injured, but the parcel discovered at a Heathrow Airport outbuilding partially ignited.

All five of the packages – which bore "Love Eire" heart stamps issued by An Post for St Valentine's Day – were confirmed to contain viable devices.

A group calling themselves the 'New IRA' later claimed responsibility for mailing them.

An Garda Síochána are investigating the letter bombs alongside the Metropolitan Police's counter-terrorism unit, Police Scotland and the PSNI.

Scotland Yard is now formally linking the packages to those sent to various British Army recruitment centres in 2014, due to particular similarities between the devices and the methodology.

Detectives in Ireland also say forensic evidence has been recovered which makes them anxious to eliminate anyone who "may have innocently come into contact with the parcels". 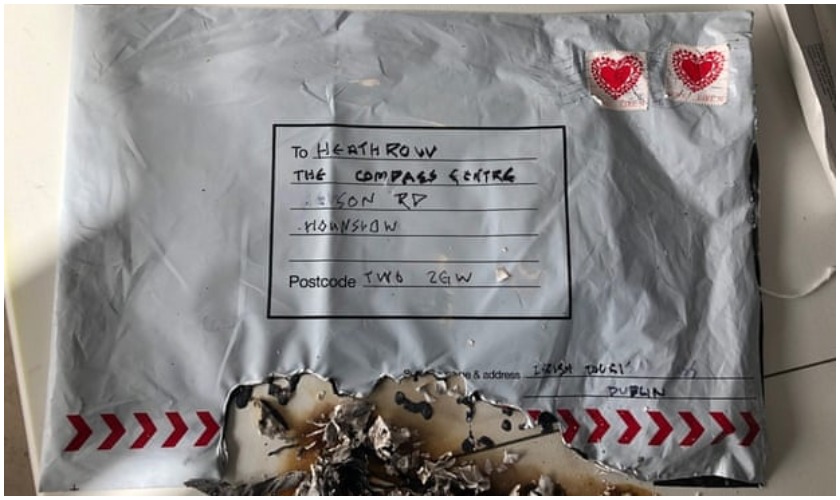 The parcel bomb sent to Heathrow partially ignited but no one was injured (Image: Met Police)

In a statement this morning, Gardaí said: "This extremely dangerous and reckless act endangered the lives of innocent persons and could have caused serious harm to anyone handling these devices.

"An Garda Síochána thanks the public and in particular postal workers who have provided information to date which has been of benefit to the investigation.

"Further to these ongoing enquiries, it is still possible that members of the public may have information that could help us with our joint investigation and An Garda Síochána want to identify any person, postal workers or other persons, in Ireland who may remember collecting/ seeing the parcels around 1st March 2019 from postal delivery locations within Ireland.

"The investigation to date has recovered forensic evidence, and An Garda Síochána and our partner agencies are keen to eliminate any person who may have innocently come in to contact with the parcels."

Anyone who remembers seeing the parcels or who has any information is asked to contact the Garda Confidential Line on 1800 666 111, or anonymously via Crimestoppers on 1800 250 025. 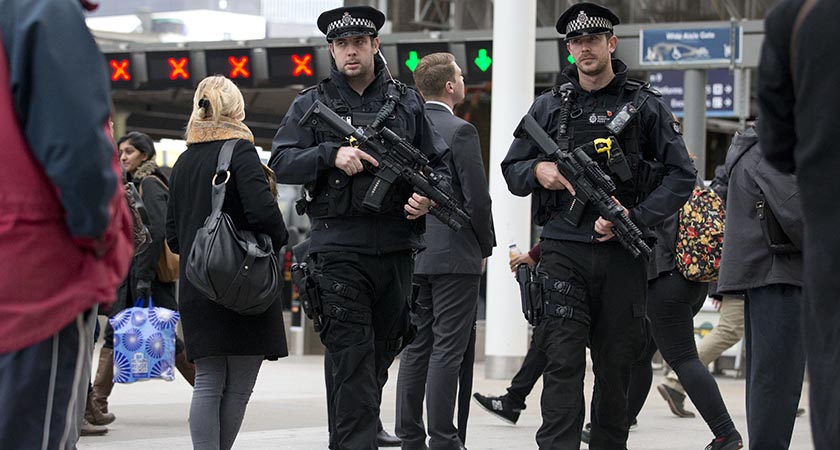 Scotland Yard has linked the devices to those sent to British Army centres in 2014 (Image: Getty)

Scotland Yard also issued an appeal this morning over the link established between the letter bombs posted earlier this year and those five years ago.

Metropolitan Police Deputy Assistant Commissioner Dean Haydon – who is Senior National Coordinator for the UK's Counter Terrorism Policing – said: "Our enquiries continue, but clearly a key element of the investigation now is the link between the devices previously sent in 2014, and the five sent earlier this year.

"As with any investigation, we will be led by the evidence, but at this stage, our principal line of enquiry is that the devices were sent by a violent dissident republican group.

"The devices that were sent not only put their intended recipients in danger, but also endangered the lives of all those who handled and processed the parcels both in the Republic of Ireland as well as the UK.

"This was an extremely dangerous and reckless act and I would urge anyone who may have information about those responsible to contact police."