The Queen, seated alone, watches as pallbearers carry the coffin of Prince Philip, Duke Of Edinburgh into St George’s Chapel

THE Duke of Edinburgh was buried this afternoon is a sombre ceremony attended by only 30 of his closest family members.

The Queen, his wife of 73 years, sat alone throughout the funeral service, due to Covid-19 restrictions. 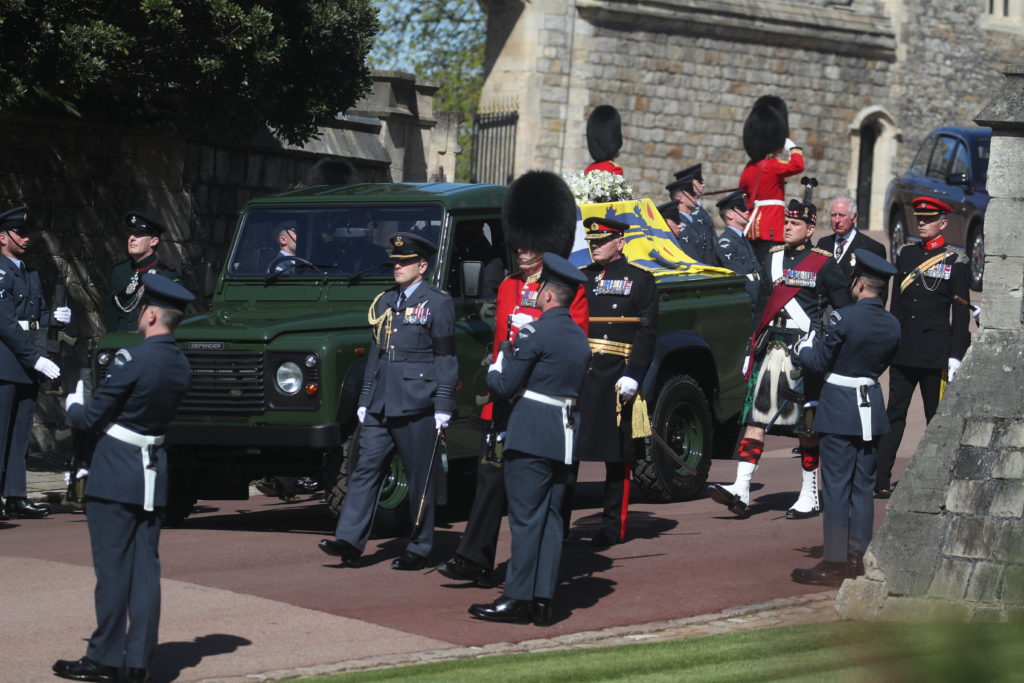 The Duke of Edinburgh's coffin, covered with his personal standard, is carried by a Land Rover Defender hearse, specially designed by the Duke for the occasion

Today, April 17, his funeral took place at that same castle, but its size was limited due to the ongoing pandemic.

The Duke of Edinburgh’s funeral was a Ceremonial Royal Funeral, similar to that of the Queen Mother’s funeral in 2002, which also took place at St George’s Chapel in Windsor.

It was not a State Funeral – which something that is generally reserved for monarchs – the Royal Family confirmed ahead of the ceremony. 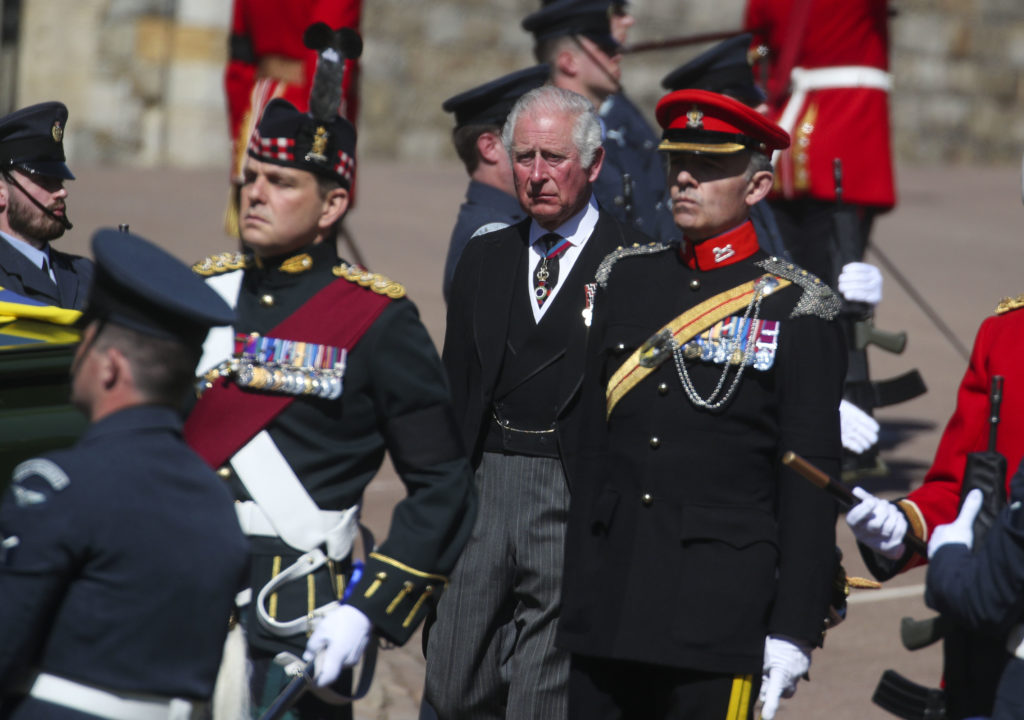 Prince Charles, Prince of Wales walks in the Ceremonial procession to St George's Chapel during the funeral of his father Prince Philip, Duke of Edinburgh, at Windsor Castle on April 17, 2021

The Dean of Windsor David Connor conducted the funeral service while the Archbishop of Canterbury Justin Welby pronounced the blessing.

Due to the public health guidelines, some elements of the funeral plan had been modified, although the day was still be very much in line with Prince Phillip’s wishes. 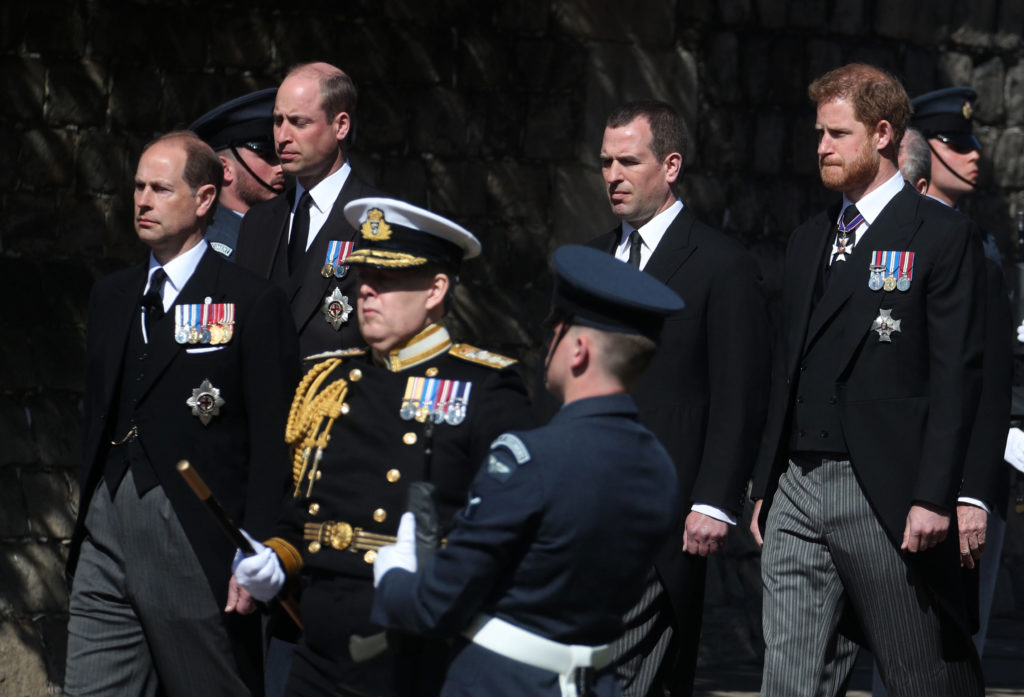 The ceremony was broadcast live on TV and radio to allow people around the world to take part in mourning.

At 2.40pm this afternoon the coffin emerged from the State Entrance of Windsor Castle into the Quadrangle.

It was followed by the members of the Royal Family who walked in the procession – which included his his children, Princess Anne, Prince Charles, Prince Andrew and Prince Edward, along with his grandsons Prince Harry, Prince William and Peter Phillips, nephew David Linley, and the Queen’s nephew David Armstrong-Jones, the Earl of Snowdon, and Princess Anne’s husband Timothy Laurence. 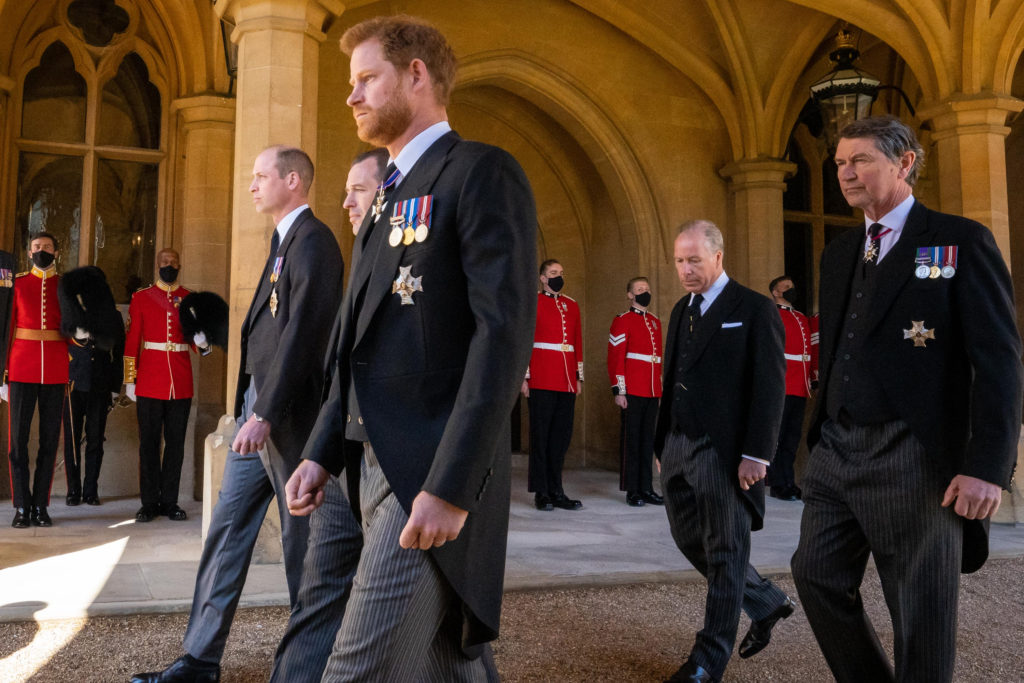 All those in the Quadrangle gave the coffin a Royal Salute before the coffin was placed onto the Land Rover - which was specially designed by the Prince for use in his funeral. 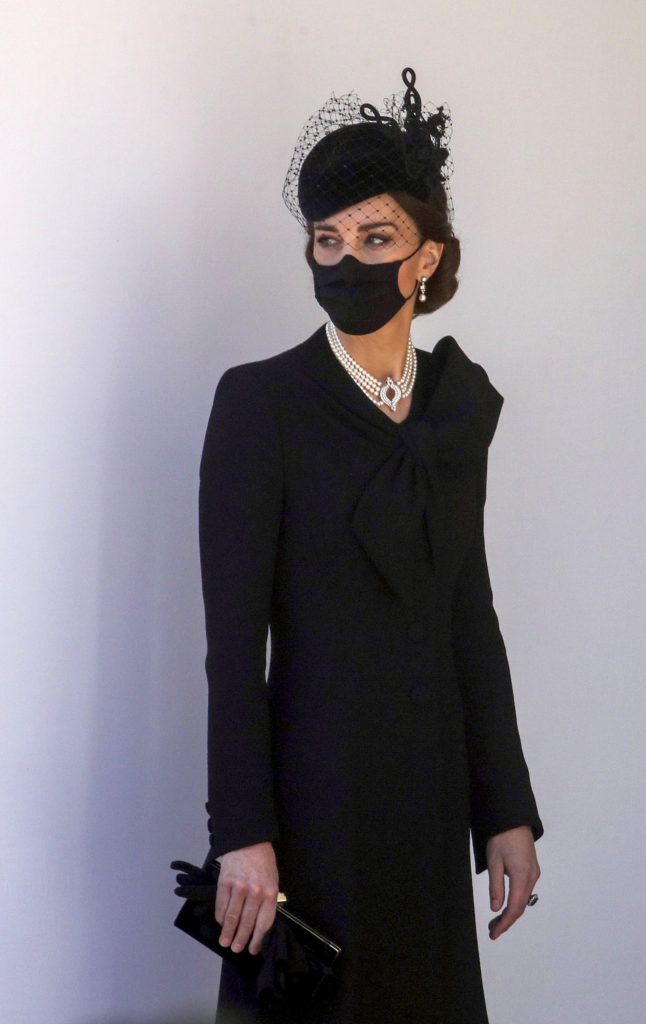 Catherine, Duchess of Cambridge stands at the Galilee Porch of St George's Chapel during the funeral of Prince Philip, Duke of Edinburgh, at Windsor Castle

The Queen departed from the Sovereign’s Entrance in the State Bentley.

The Procession moved towards St. George’s Chapel, through Engine Court, Chapel Hill Parade Ground and into Horseshoe Cloister, arriving at the West Steps.

The procession route was lined by representatives from the Royal Navy, the Royal Marines, the Highlanders, and 4th Battalion Royal Regiment of Scotland and the Royal Air Force. 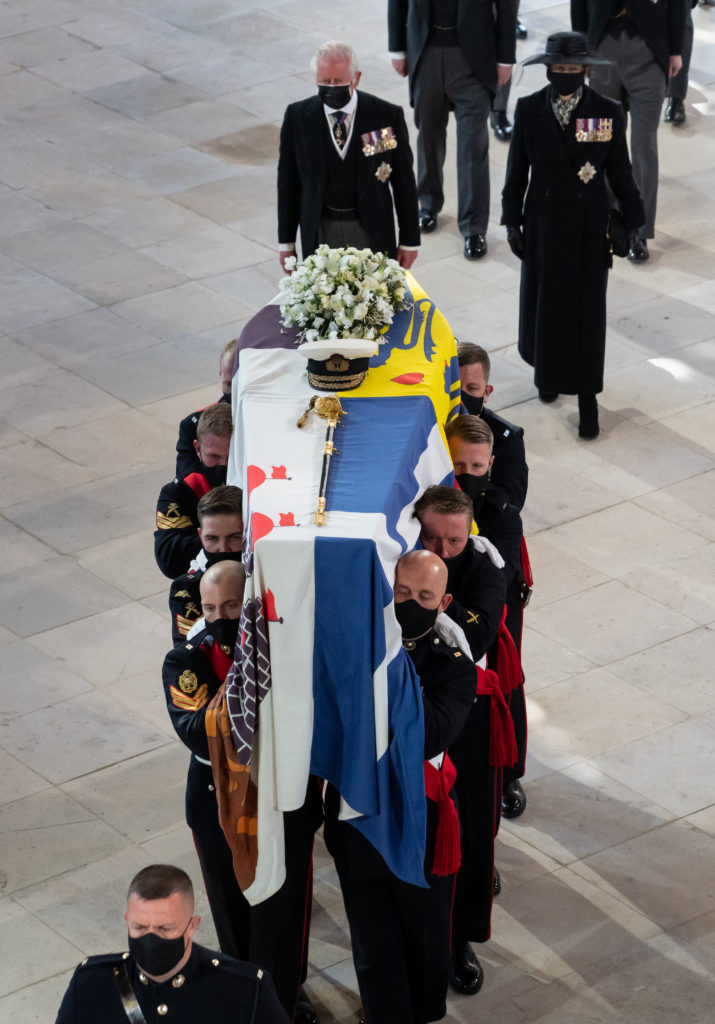 Princess Anne, Princess Royal and Prince Charles, Prince of Wales follow the coffin of Prince Philip, Duke of Edinburgh, as it is carried into his funeral service at St George's Chapel at Windsor Castle

Minute Guns were fired by The King’s Troop Royal Horse Artillery from the East Lawn of Windsor Castle for the duration of the Procession. 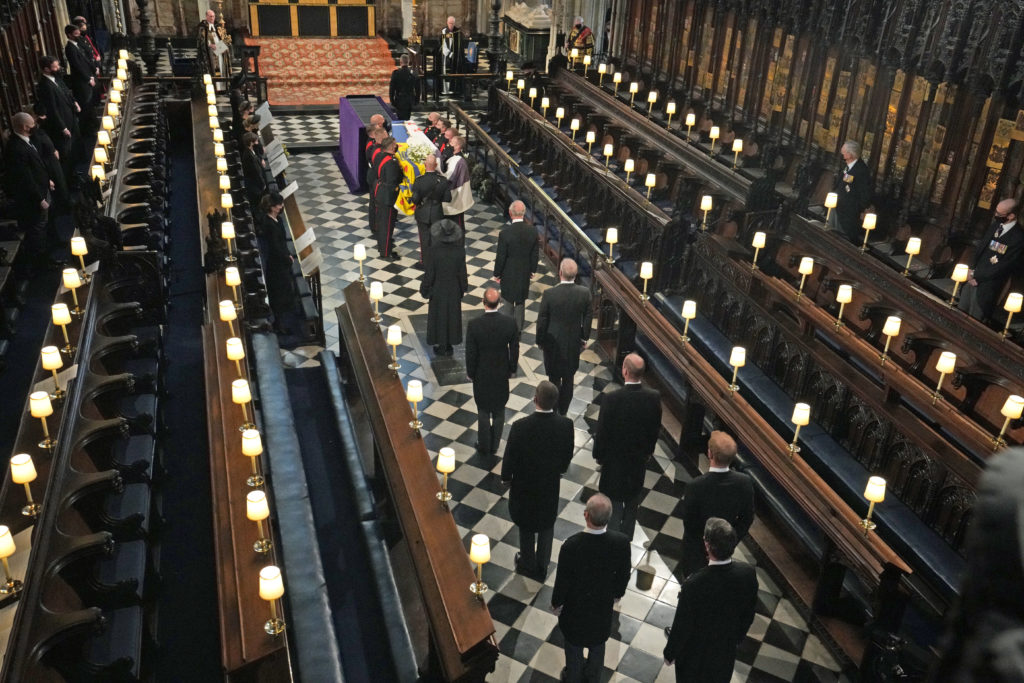 The National Anthem played as the coffin arrived at Horseshoe Cloister, where it was met by representatives from the Commonwealth and a Dismounted Detachment of the Household Cavalry 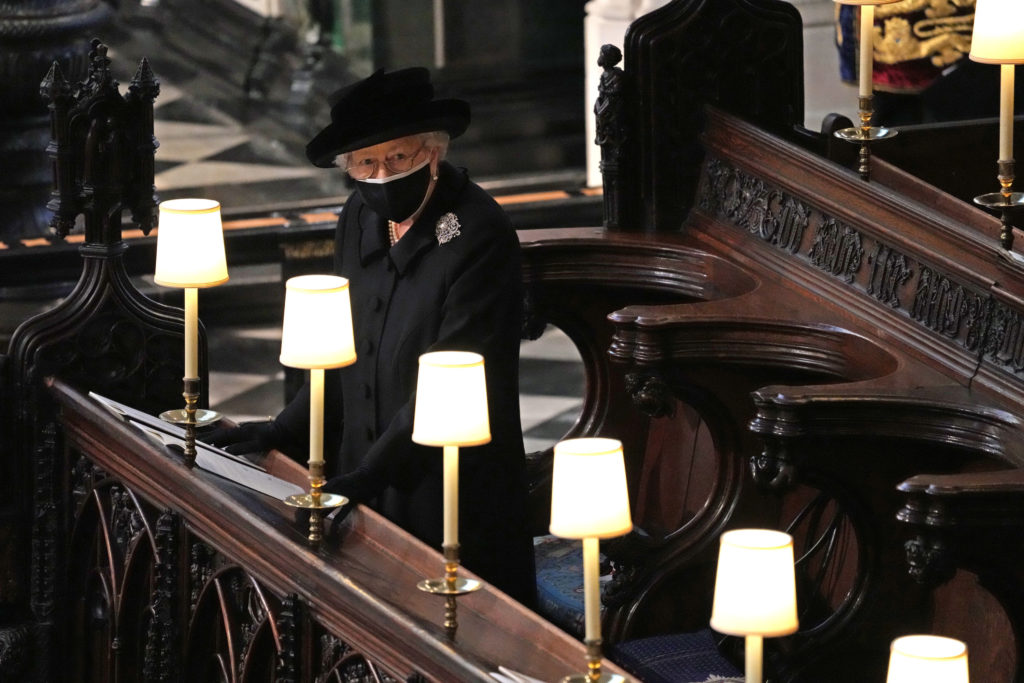 The Queen, seated alone, watches as pallbearers carry the coffin of Prince Philip, Duke Of Edinburgh into St George’s Chapel

The Bearer Party carried the coffin up the West Steps of the Chapel before pausing for a National Minute Silence at 3pm. The Dean of Windsor and the Archbishop of Canterbury then received the coffin.

As the doors to St. George’s Chapel closed, the Royal Navy Piping Party piped the ‘Carry On’.

Members of the Royal Family who attended the funeral, included Camilla, the Duchess of Cornwall, Sophie, the Countess of Wessex and Forfar Viscount Severn, The Lady Louise Mountbatten-Windsor, Catherine, the Duchess of Cambridge, Zara and Mike Tindall, Princess Beatrice and her husband Edoardo Mapelli Mozzi and Princess Eugenie and husband Jack Brooksban. 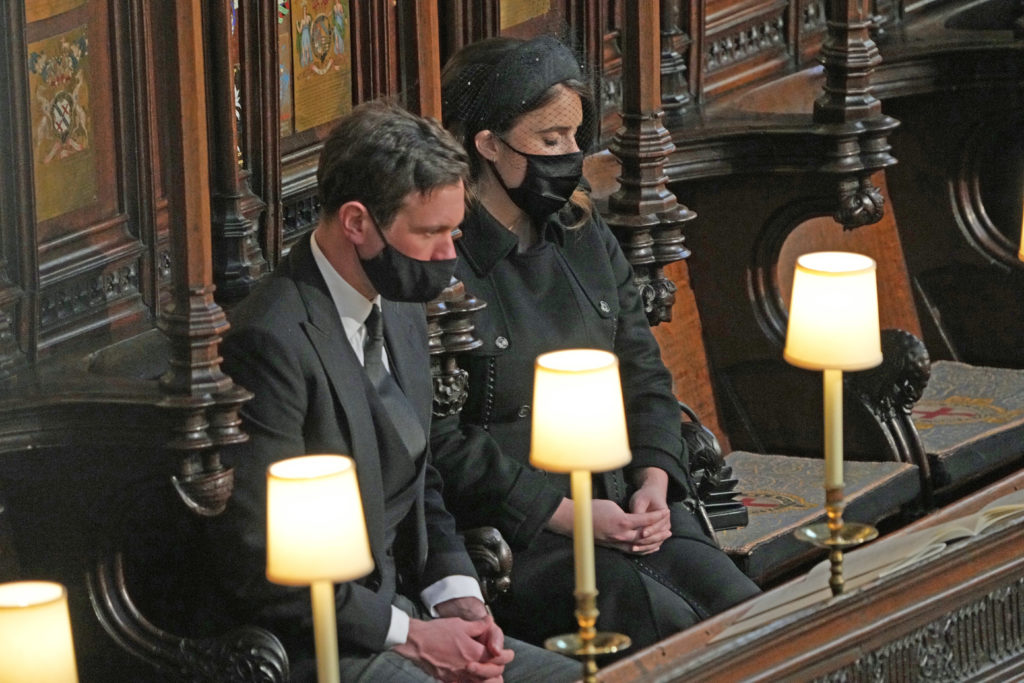 Also in attendance were the Lady Sarah and Mr. Daniel Chatto, The Duke of Gloucester, The Duke of Kent, Princess Alexandra, the Hon. Lady Ogilvy, The Hereditary Prince of Baden The Landgrave of Hesse The Prince of Hohenlohe-Langenburg and the Countess Mountbatten of Burma.

The congregation wore masks for the Service and Members of the Royal Family wore Day Dress or Morning Coat with medals. 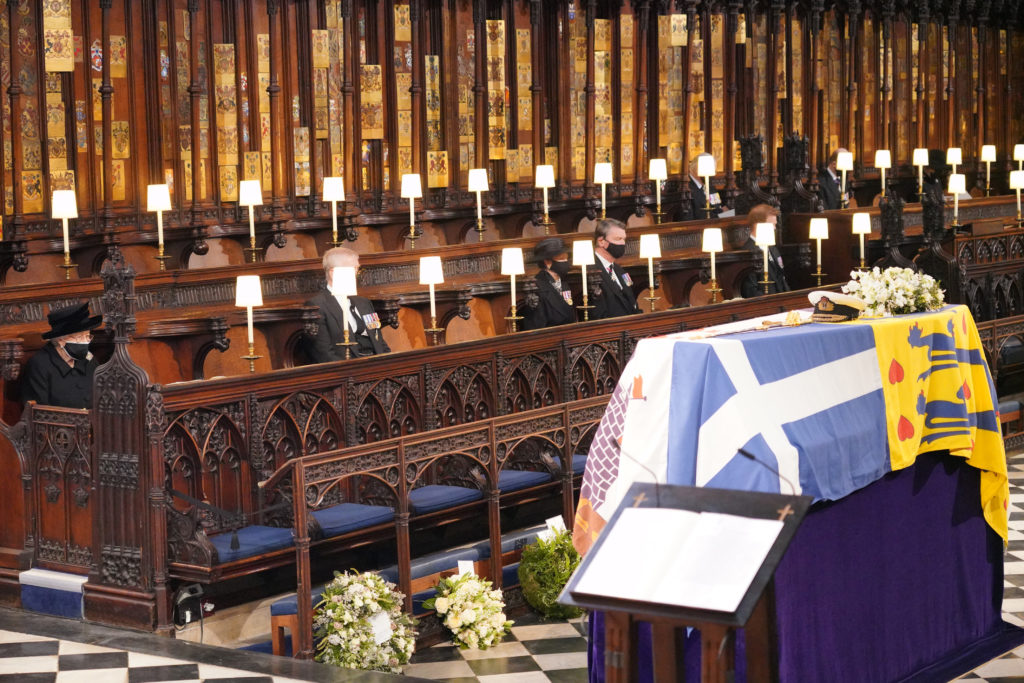 During the Service, a small choir of four sang pieces of music chosen by The Duke of Edinburgh. The choir was located in the Nave, away from the seated congregation, and in line with public health guidelines there was no congregational singing. 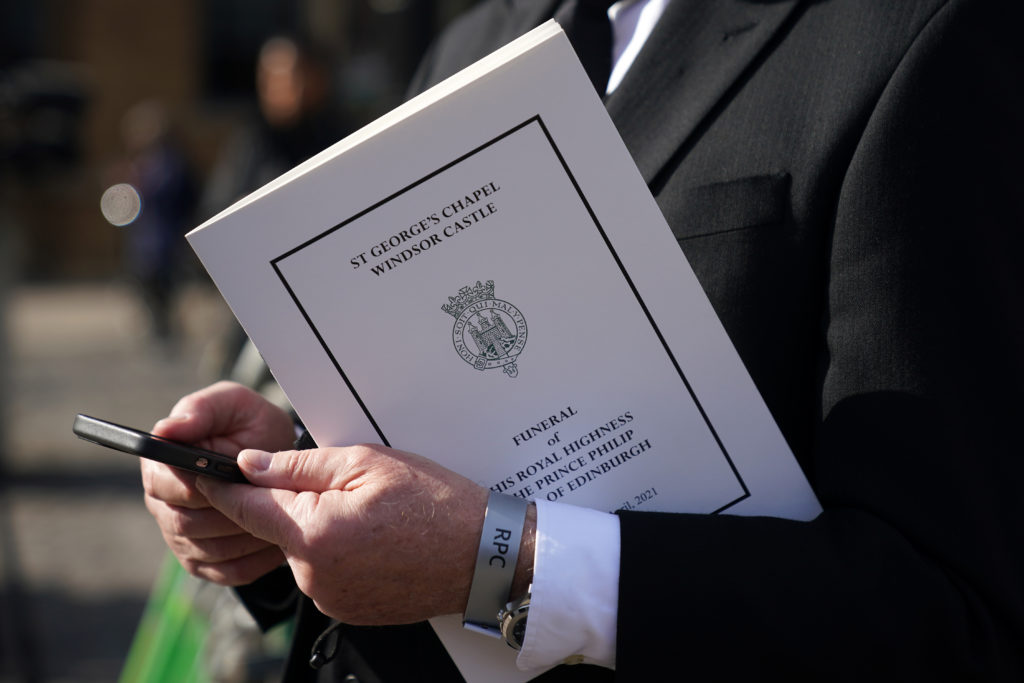 A mourner holds an order of service outside Windsor Castle after the funeral of Prince Philip, Only 30 mourners were in attendance due to Covid-19 restrictions

Once finished the Duke of Edinburgh’s Coffin was lowered into the Royal Vault.