A CO. Donegal-based mother has spoken about her successful campaign for justice after a London newsagent threw her 11-year old autistic son and his service dog out of his shop.

Jimmy McCafferty of Letterkenny, Co. Donegal was entering DM News in the East End of London with his mother Katy and brother Joseph when shopkeeper Dudu Miah refused them access due to the presence of Jimmy’s service dog Kizzy.

When the boy's mother informed Mr Miah that it was against the law to do so, as Kizzy was clearly marked as a service dog, he refused to listen.

But a judge has now ordered the shopkeeper, 56 and originally from Bangladesh, to pay £6,775 in compensation costs and costs to the court of £15,225.

Handing down the judgement at Bow County Court, District Judge Christopher Vokes said that Mr Miah’s strict no dogs policy was “a serious act of discrimination” and reflected his “discriminatory frame of mind.”

Speaking this week to The Irish Post, Mrs McCafferty said the incident has now left her feeling “nervous” whenever she now enters shops with Kizzy.

“Whenever I go into shops with Jimmy and Kizzy now I wonder whether it’s going to happen again," she said.

“Mr Miah was completely in the wrong to do what he did. I told him that what he was doing went against the Equality Act but he just told me to shut up and to get out of his shop.

“He tried to say that Kizzy wasn’t wearing her high-visibility vest and so he didn’t know that she was a service dog, but I have photographs from that day proving she did." 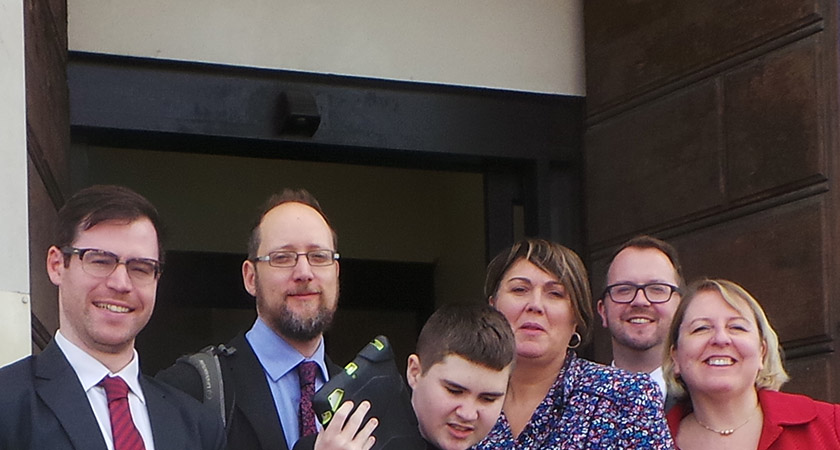 Jimmy with his mother and legal team outside Bow County Court

Jimmy was on holiday in London over the Easter holidays last year with his mother and brother, who also suffers from a form of autism, when the incident occurred.

They entered the Limehouse shop to top up their oyster cards, as the trio had planned a trip to the West End to view Shawn the Sheep sculptures.

Jimmy uses his service dog Kizzy to help keep him calm in public due to his sensitivity to noise, which sometimes causes him to try and run away.

Kizzy, a labradoodle, was trained by specialist charity My Canine Companion specifically to meet Jimmy’s needs.

Jimmy is tied to Kizzy via a special harness and when he bolts, she sits down to stop him running away. 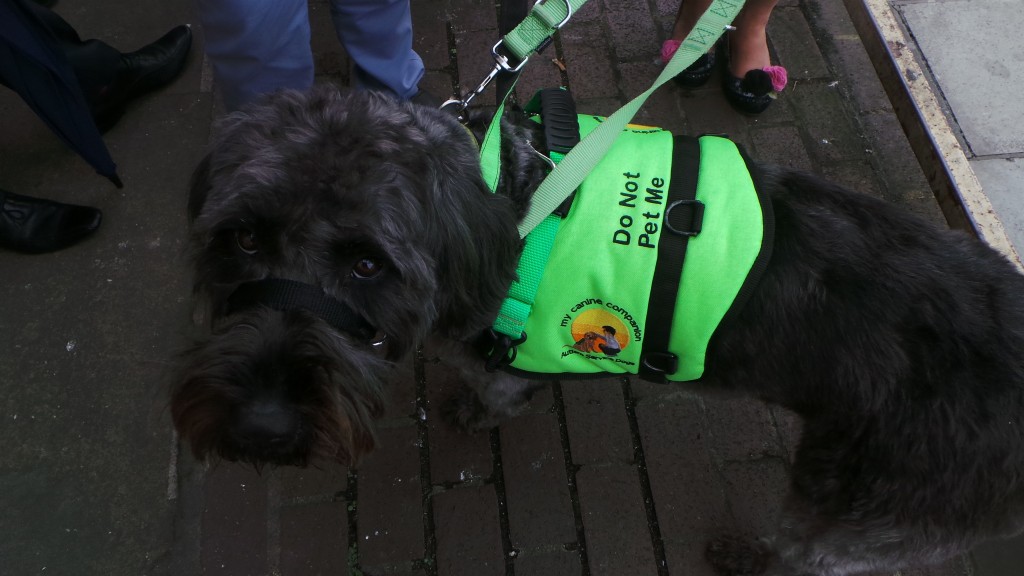 Kizzy was trained by the specialist charity My Canine Companion

“Taking him to court was only ever about justice. I have offered to give the money to charity," Mrs McCafferty said.

"I just want Jimmy’s case to show shopkeepers that they can’t do this to people with service dogs and get away with it.

“Jimmy just said that he wanted ‘the bad man’ to be told off.”

Jimmy’s solicitor, Rheian Davies of DH Law Ltd said: “The Equality Act provides for disabled children and adults who need the services of an assistance dog.

“Shop owners such as Mr Miah who have a 'No Dogs' policy have to relax that policy in cases such as this, in order to meet the legal requirement of making a ‘reasonable adjustment’.

“This is well-known in the cases of guide dogs for blind people but less so for the myriad of dogs that help people with all kinds of disabilities.

“None the less, Jimmy is a disabled child and to refuse to serve him, because he has an assistance dog is unlawful discrimination.”

Tralee, Bray and Castebar among 11 Irish towns to be granted 'autism-friendly' status