Letter to 'That boy with the glasses' reaches Donegal recipient

AMID the debate surrounding the efficiency of Ireland’s new €27million postcode system, perhaps this is the best evidence that the old ways are still the best.

A letter sent from Belfast, intended for Barry Henderson in Buncrana, Co. Donegal, reached its destination, despite the esoteric address.

The envelope was addressed to: “Your man Henderson, That boy with the glasses, Who is doing the PhD up here at Queen’s in Belfast, Buncrana, Co. Donegall (sic), Ireland.”

Being sent from Belfast, the letter would have had to cross between two national postal jurisdictions, from Royal Mail to An Post.

A local postman who knew Mr Henderson delivered the missive to his wife at her workplace at local newspaper the Inish Times.

The message inside the letter read: "If this has arrived, you live in a village." 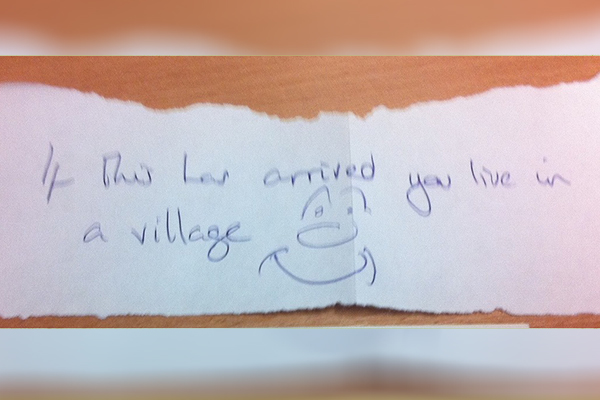 Sharing a picture of the letter on Facebook, Mrs Henderson wrote: "A guy Barry knows sent him this from Belfast, with that wee note included inside it.

"The postman delivered it to the Inish Times office when I was out, asking if it could possibly be for my husband. I think it's brilliant. Only in Donegal.”

The letter was sent by a friend of Mr Henderson, who was testing the Donegal man’s claims that Buncrana (population 6,839) is so small, that even a vaguely addressed letter would reach its intended recipient.