Police and emergency services are seen behind a police cordon near a bar (L) in the centre of Hanau, near Frankfurt am Main, western Germany, on February 20, 2020, after at least nine people were killed in two shootings late on February 19. - At least nine people were killed in shootings targeting shisha bars in Germany that sparked a huge manhunt overnight before the suspected gunman was found dead in his home early on February 20. The attacks occurred at two bars in Hanau, about 20 kilometres (12 miles) from Frankfurt, where armed police quickly fanned out and police helicopters roamed the sky looking for those responsible for the bloodshed. Police in the central state of Hesse said the likely perpetrator had been found at his home in Hanau after they located a getaway vehicle seen by witnesses. Another body was also discovered at the property. German counter-terror prosecutors said on February 20 they had taken over the investigation into two linked shootings. (Photo by Thomas Lohnes / AFP) (Photo by THOMAS LOHNES/AFP via Getty Images)

NINE people have been killed and several more have been injured after a gunman opened fire in two shisha bars in the German city of Hanau on Wednesday night.

The incident sparked an overnight manhunt before the assailant was eventually found dead in his home in the early hours of Thursday morning.

His body was found alongside the body of a woman, believed to be his mother.

Police say the suspect killed himself, and there are reports that a letter of confession was found in the house, in which the gunman expressed far-right views.

The attacks occurred at two bars in Hanau, about 20km from Frankfurt in west Germany.

It's understood that the suspect was a German citizen with a firearms licence, and that ammunition and gun magazines were found in his car.

Authorities are treating the attacks as terrorism, and German counter-terror prosecutors said they had taken over the investigation because of the "particular importance of the case", a spokesman said, adding that "there are signs of a xenophobic motive" for the killings. 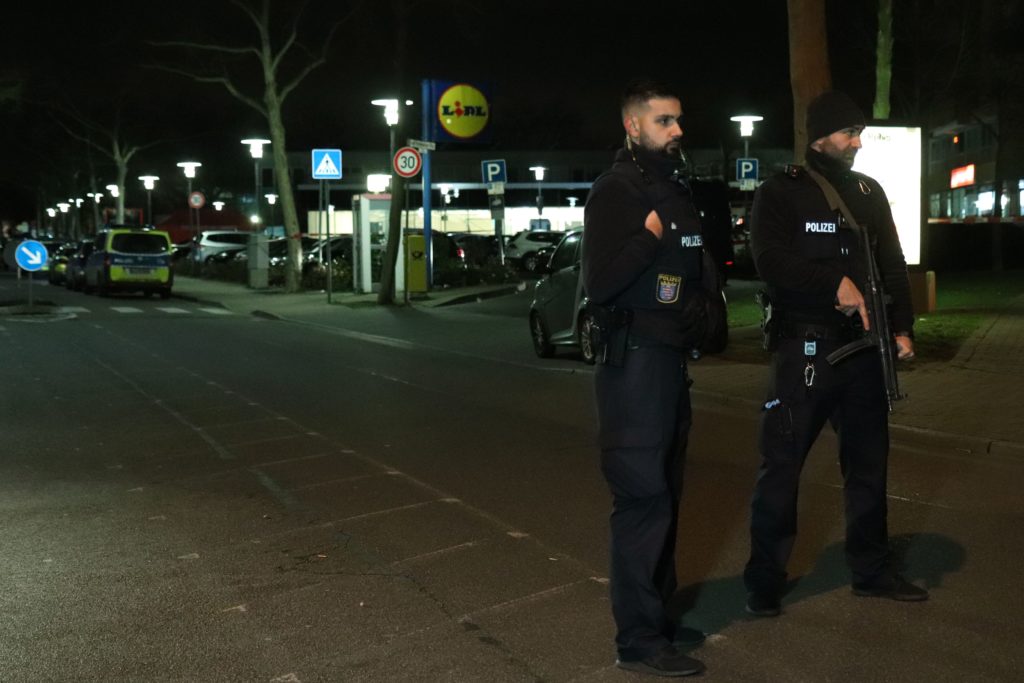 Police gather at the scene of a shooting in Hanau, western Germany, on February 20, 2020. - At least eight people were killed in two shootings late on February 19 near the German city of Frankfurt, with an unknown number of attackers still at large, police said. The shootings targeted shisha bars in Hanau, about 20 kilometres (12 miles) from Frankfurt, according to local media, and police launched a huge manhunt in the town of around 90,000 people. (Photo by Yann Schreiber / AFP) (Photo by YANN SCHREIBER/AFP via Getty Images)

It's been reported that those who were fired at and killed in the first shisha bar were of Kurdish origin.

The first attack occurred at the Midnight bar in the centre of the city around 10pm.

Three people were killed in front of the building, with witnesses reporting hearing a dozen shots being fired.

The second shooting occurred at the Arena Bar.

A gunman reportedly rang the doorbell and shot people who were in the smoking area, killing five people including a woman, according to the German publication Bild.

Two employees were allegedly among the victims in the second bar.

The mayor of Hanau, Claus Kaminsky, told Bild that it had been "a terrible night".

"You could not imagine a worse night. It will of course keep us busy for a long, long time and remain a sad memory.

"The police must have the chance to clear up the situation and investigate - until then, we should wait with prudence, no matter how hard this may be," he said.