PHOTOGRAPHS of the the clothes worn by an unidentified man who washed up on an Irish beach popular with tourists have been released. 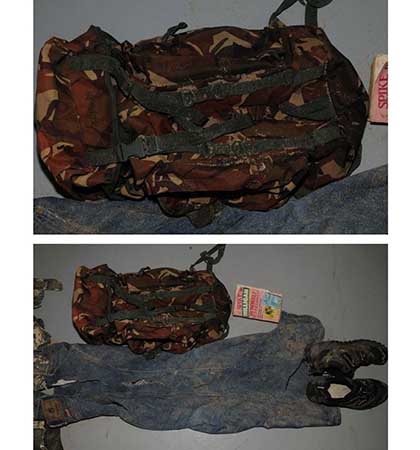 A close up of the bag, boots and jeans worn by the man. (Picture: An Garda Síochána)

The body of the man was discovered on Bray Beach on March 27 and remains unidentified.

Police in Ieland released the pictures of the clothes he was wearing at the time of the discovery in an effort to identify him.

An Garda Síochána described the man as white, 6ft 1, in his early 40's, with blue eyes, a very slim build with dark brown hair greying around the temple.

The clothes he was wearing at the time include a green and brown camouflage jacket and rucksack, blue jeans and black runner boots.

A pair of glasses were also found in his rucksack, as well as a copy of a Spike Milligan book.