The protest was organised by the Belfast Feminist Network (Image: Charles McQuillan / Getty)

AROUND 200 people staged a protest tonight outside Kingspan Park, the home of Ulster rugby, following the recent trial involving two of the club’s players.

The protest, organised by the Belfast Feminist Network, took place ahead of Ulster’s Guinness PRO14 game with Ospreys.

It was the club’s first game at home since players Paddy Jackson and Stuart Olding were found not guilty of rape at Belfast Crown Court two weeks ago.

Addressing the protesters, a spokesperson said: “Tonight we are here specifically to send a message to Ulster Rugby, the IRFU and all those in leadership within the rugby community, and that message is: stamp out misogyny.

“Recent events have exposed harmful and dangerous attitudes to women expressed by some elite rugby players.

“However narrow or broad that culture might extend in Ulster Rugby, we demand that they stamp it out completely.” 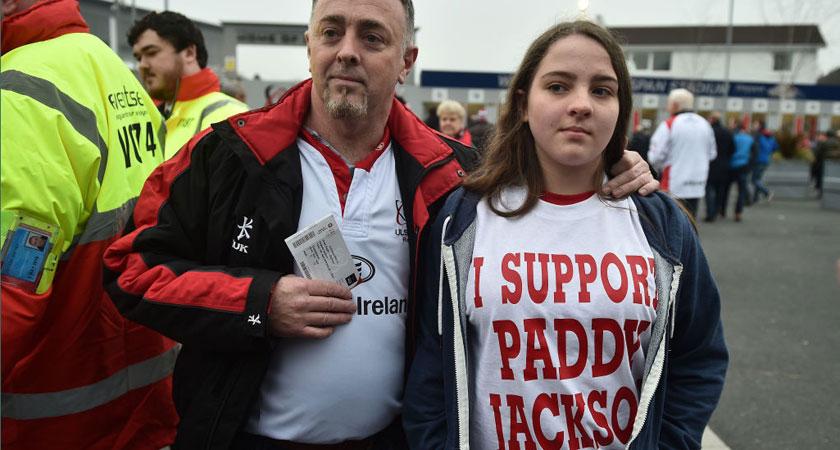 There was also support for the players (Image: Charles McQuillan / Getty)

Jackson and Olding, along with two other men, Blaine McIlroy and Rory Harrison, were acquitted of all charges in relation to the incident.

However the content of text messages from group chats involving the players, which were used in evidence at the trial, sparked anger.

The IRFU and Ulster Rugby are now conducting an internal review into the players to decide their futures.

Teammate Craig Gilroy is also the subject of an Ulster Rugby review over a text message he allegedly sent to the group.

The futures of Jackson and Olding have been debated in print and online in recent weeks.

Petitions have been launched calling for both their reinstatement and expulsion.

Meanwhile both supporters and opponents of the pair have taken out newspaper ads to support their cause.

And while key sponsor Bank of Ireland has expressed concern over “behaviour and conduct issues”, the Ulster Rugby Supporters’ Club warned season ticket sales would drop if the pair weren’t reinstated.

Around 200 feminist protestors have gathered outside Kingspan stadium in Belfast where Ulster Rugby are playing this evening, to protest misogyny following the recent rape trial pic.twitter.com/en24BSxH87

Some of the crowd at tonight’s protest outside Kingspan Stadium. pic.twitter.com/NewcQ19M37