From pop stars to politicians and celebrities to community champions,  the Irish were out in force at Buckingham Palace this evening for a special reception recognising their contribution to life in Britain.

Over 300 people - from the worlds of business, politics, the arts, showbiz, sport and charity - attended the event, which was hosted by Queen Elizabeth and the Duke of Edinburgh to  kick off celebrations for next month’s state visit to Britain by President Michael D Higgins.

Among the guests to receive a formal audience with the Queen at the start of the reception was the Ambassador of Ireland Dan Mulhall and his wife Greta, Secretary of State for Northern Ireland Theresa Villiers MP and former London Irish star Bob Casey.

Ambassador Mulhall said: “This is a huge occasion for the Irish community in Britain. It has made a huge contribution to Britain, to Ireland and to British-Irish relations and this is a great recognition of the contribution they [the guests] have made by her Majesty in hosting this event in advance of the state visit.”

One of the youngest faces to meet the Queen was One Direction singer Niall Horan, who has lived in Britain for the last four years having achieved global success with his X Factor boy band.

“It is an absolute honour to step inside this building and meet the lady herself," said the 20-year-old who is originally from Westmeath. "Obviously when Irish and English people get together it is always a good occasion."

On being invited to join the prestigious occasion, he added: "I saw an envelope which had the Buckingham Palace royal stamp on top and it was a bit ‘OK what is this about’ and I got a bit of a shock and here we are three weeks later.” 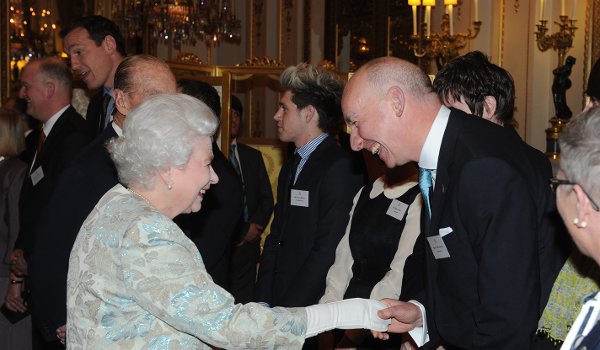 Another familiar face in the crowd was Pat O'Connell, the Cork fishmonger who met the Queen at the city’s English Market during her visit in 2011. A picture of the pair laughing became an instant hit and was published in the media around the world.

The Queen and Mr O'Connell, pictured above, exchanged warm greetings again this evening with much laughter on both sides.

"Well, she recognised me anyway,” he said. “We had a joke back in 2011 where I told her that I was more nervous than I had been since I got married 30 years earlier. Well tonight I told her I was better dressed than I have been for 30 years,” he joked.

“We have no idea what to expect,” Mr Linehan joked on arrival. “If you are a writer and you turn down a chance to get inside walls like these then you would be drummed out of the business.” 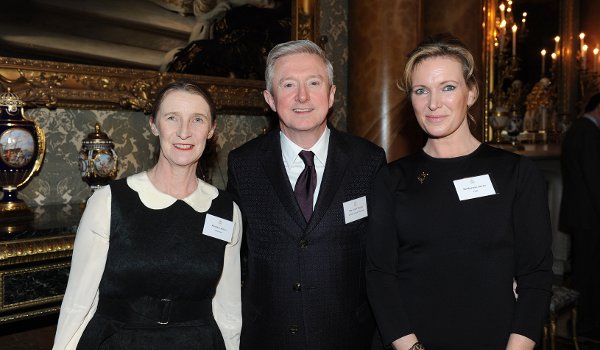 “Things are better than they have ever been," said Mr McGuigan, who is originally from the North of Ireland. "I have always tried to foster a good relationship between the two countries even through the troubled times."

Chef Rachel Allen and fashion designer Orla Kiely were also among the invited guests. While others representing community groups came from as far as Scotland such as Dr. Cecilia McDaid, Chair of Conradh na Gaeilge Glaschú which promotes the Irish language in Glasgow.

Bernie O'Roarke, an outreach worker for Solace Women's Aid, was among the many London-based charities who attended. "I'm very proud and my family back in Ireland are very proud, really thrilled,” she said.

The state visit takes place from April 8-11 when the Queen will host President Michael D Higgins at Windsor Castle.