ROY KEANE and Jamie Carragher were at loggerheads while trying to figure out heir combined Manchester United '99 / Liverpool '20 team.

With Liverpool currently cantering to what will be their very first Premier League title and looking likely to break a number of records as they go, inevitably comparisons to the greatest sides in English football are going to be made.

During yesterday's Monday Night Football, Manchester United and Liverpool banner-men Keane and Carragher looked to decipher which players from two of English football's most impressive sides would make a combined XI.

While both managed to stay considerably more impartial than their on-field scuffles against one another's teams over the years might suggest, it was only natural that after a few minutes, the smiles were gone and replaced with expressions of bemusement and shock.

Keane, with his matter-of-fact approach to analysis only picked one Liverpool star (Virgil Van Dijk) in his combined eleven, citing that Liverpool - as of yet - haven't won any major trophies this year.

Carragher meanwhile ended up picking a more balanced combined side, with seven representatives from United's treble winners, and just four from the runaway Premier League leaders.

He was quick to make the case for a number of Klopp's men, including Trent Alexander-Arnold and Sadio Mane - the latter of which turned Keane's face into something resembling a crispy jacket potato, due to the fact that Mane's inclusion would lead to Ryan Giggs' omission. 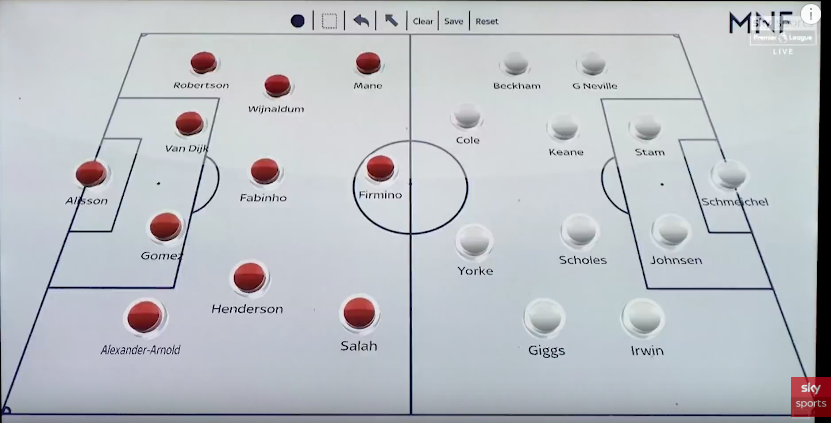 The '99 United side and current Liverpool side being considered

As you'd expect with the Cork-native, discussions remained tense, particularly when picking between Peter Schmeichel and Alisson Becker, Denis Irwin and Andy Robertson and between the front line of Dwight Yorke & Andy Cole and Mane, Roberto Firmino & Mo Salah, but Keane remained as fiercely stubborn as he was during his playing days.

He even initially included Alexander-Arnold ahead of Gary Neville in his team, but later changed his mind, reasoning that the former United captain was a better defensive full-back than the Liverpool youngster.