AN IRISH club in Manchester is on track to hit the £1million mark in funds raised for local charities.

Since Kevin Fitzpatrick became the manager of St Kentigern’s Irish Club in Fallowfield the venue has become a hive of fundraising activity.

As he celebrated his thirteenth year in the post in March, the Fermanagh-native was already well on the way to hitting £1million in funds raised for local good causes. 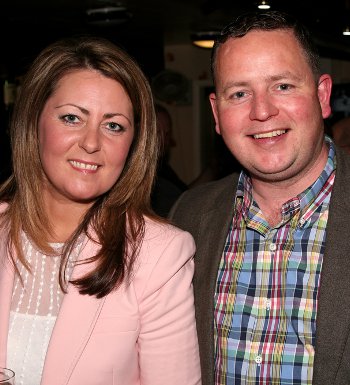 St Kentigern's' Kevin Fitzpatrick, pictured here with wife Tina, has been manager at the club since 2002

“We have had so many great events held here over the years and when we totted things up this year we realised we had quite an impressive fundraising total to date,” he told The Irish Post this week.

“And if we do that it will be a huge achievement and a great testament to the team here and the community in Manchester who have shown such great support for all our charities.”

Fundraising events are held regularly at St Kent’s, which recently hosted a Boxing Memorial Night in memory of tragic teen Macauley Moran, which raised £6250 to fund a headstone for the youngster’s grave.

Prior to that a night organised at the club by cancer sufferer Betty Carry raised a whopping £20,000 for the local St Ann’s Hospice.

And there are many other local people, funds and charities who have benefitted from the work of the club and the support of the community for their fundraising events.

“We have supported a number of charities over the years,” Mr Fitzpatrick explained, “but some we would revisit quite regularly.”

“St Ann’s Hospice, The Christie cancer centre and the Francis House Children’s Hospice in Manchester, for example, and also the work of Father Pat Clarke, a Manchester Irish priest who has been working with the street children of Sao Paulo in Brazil for 50 years this year,” he added.

Every year the club also hosts a St Patrick’s Day breakfast and a Xmas Day Lunch for the more vulnerable members of the local community, with the help of local volunteers.

While the Donagh-native - who has been living in Britain for more than 20 years now, and was married to Tina Byrne in Aughrim, Co. Wicklow in 2014 – is quite likely to hit the £1million target this year, he has no plans to slow down on the fundraising anytime soon

In fact St Kent’s already has a host of fundraising nights in the diary for June, and Mr Fitzpatrick is currently planning their annual Jimmy Molloy Golf Day - which is due to take place in September.