Mason O'Grady, 13, was hit by a car while on a family walk on Easter Sunday

TRIBUTES have been paid to a “beautiful” 13-year-old boy who died after being hit by a car while out for a walk with his family on Easter Sunday.

Mason O’Grady was crossing Chester Road in Erdington, Birmingham at 6.50pm on Sunday, April 12 when he was struck by the car.

The teen, whose family has roots in Ireland, was rushed to hospital with serious injuries but died shortly afterwards.

The car, a Volkswagen Polo, left the scene but was later located in Sutton Coldfield.

A 28-year-old woman, who was arrested on suspicion of causing death by dangerous driving and failing to stop, has since been released under investigation while enquiries continue.

In a tribute, Mason’s devastated family said: "Mason was a handsome, kind, loving and genuine boy with a heart of gold.

"He would do anything to make you smile and he brought happiness and joy to the life of everyone he met.”

"While out walking with his family he was hit by a car as he crossed the road. As a family we are asking for any witnesses to come forward to help us understand why this happened to our beautiful, kind spirited boy.

"Mason, we will love you always." 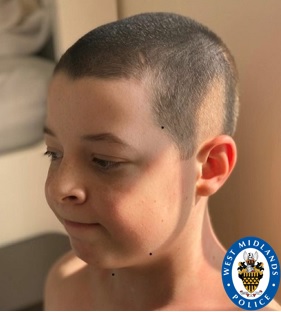 Mason O'Grady, 13, was hit by a car while on a family walk on Easter Sunday

Members of the Sutton Town Netball club, where Mason’s mum Hayley O’Grady is a coach, have since set up a fundraising page to support the family with “any costs they face at this awful time”.

They explain: “Sutton Town NC have set up this go fund me page to show our support and condolences to one of our amazing coaches, Hayley O’Grady.

"On the 12th April 2020 her son, Mason, her best friend, her first born, her shadow, was unfairly taken away from her in a collision with a car.

"We can only imagine how heart breaking this must be for her and her family, including one of our own players - Rosie.

"Mason was a beautiful soul and many of the girls will have met him at training or events, always smiling and getting involved. He will be sorely missed by us all.

"We want to offer support to the family with any costs they face at this awful time. (Funeral costs, living expenses, whatever they need) we sending this to club members and hope everyone could donate even the smallest amount. We are a netball family so let’s support each other."

More than £16,500 has already been raised on the fundraising page.

Just one-third of Irish people plan to return to the office when pandemic ends, study shows