MICHAEL FLATLEY'S adored mother is back in the arms of the love of her life after being laid to rest alongside her late husband today.

The dancer's 81-year-old mother Eilish (Elizabeth) Flatley was buried beside her husband Michael Snr, in the picturesque village of St Mullins in south Co. Carlow.

Her remains were taken to her final resting place following Midday Requiem Mass at St Moling's Church, celebrated by Fr Eddie Aughney, the local Parish Priest, in the nearby valley village of Glynn nestled beneath the majestic Blackstairs Mountains and surrounded by the winding river Barrow. 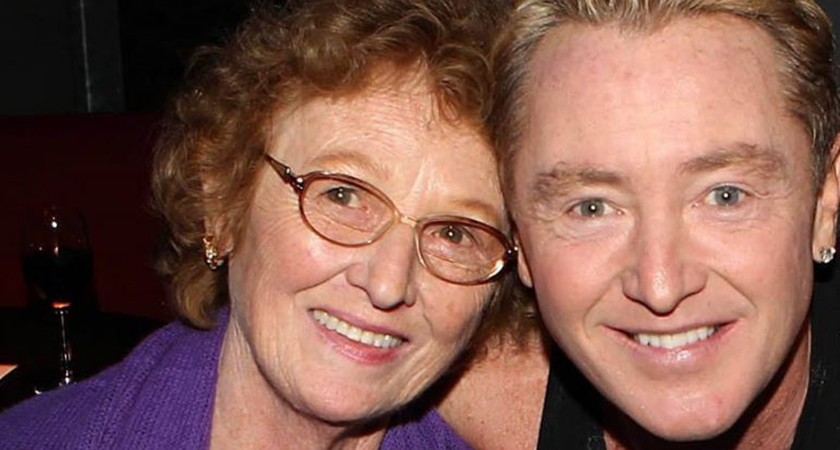 Fr Aughney said to mourners that loosing a mother “leaves a gap that can never be filled".

"She leaves one home but goes to another,” he said.

He explained that he had met Elizabeth only six weeks ago in Dranagh as she was home visiting relations. 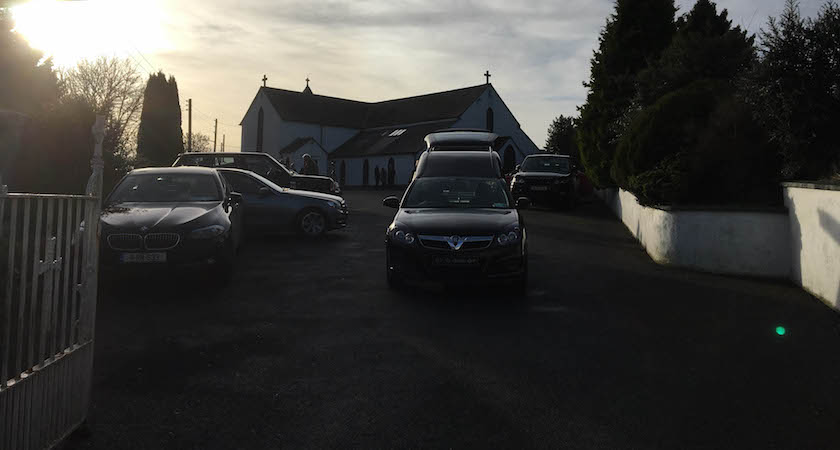 “I’m so thankful I got to meet her then and little did I think then that we would be here to today at her funeral. We spent an hour together and she spoke of coming back here in the summer but that she would need to have a driver to bring her around as she didn’t like driving at night.”

A wake took place in Chicago in the US 10 days ago for the Irish woman who was laid to rest today with her husband Michael Sr, originally from Culfadda, Co Sligo.

The 88-year-old had emigrated more than 60 years ago where he started his own business. 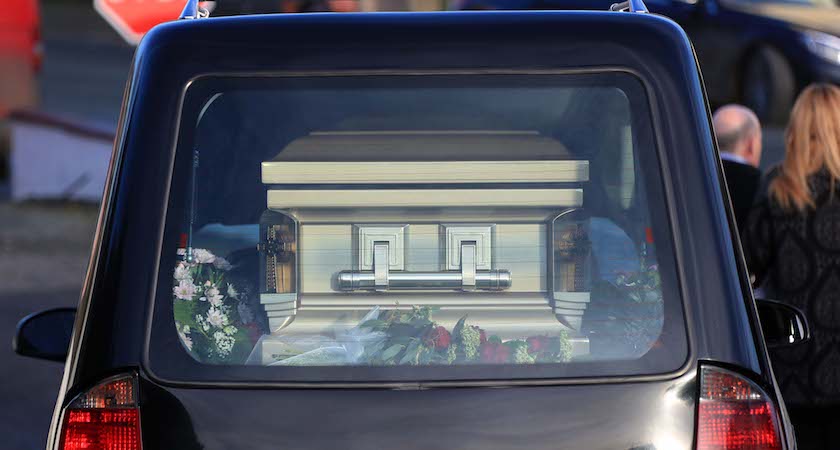 The couple met in Detroit and set-up a hugely successful construction and painting company.

Eilish Flatley (nee Ryan) hailed from the townsland of Dranagh close to Glynn in south Co. Carlow, where her father was a farmer.

Her mother, Hannah Ryan was a champion Irish dancer and is widely credited with having given critical support, and advice to Lord of the Dance Michael, as he started out on his own dazzling dance career, which took him from the dizzying success of the Riverdance show to global stardom.

The skies, heavy and dark on the day, reflected the unquenchable sadness that marked the end of an indestructible love affair between the Flatley’s treasured mother and father. 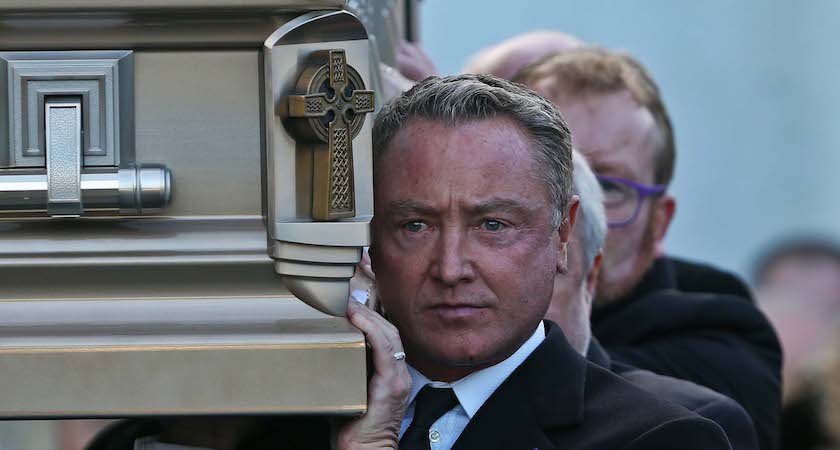 Michael Flatley paid a beautiful and heartfelt tribute to his late mother Eilish.

Giving the eulogy along with his sister Annie, Michael explained: “I know everyone says this about their mother but she really was the greatest mother in the world.

"She was giving, loving, kind and warm. She loved her children but the love of her life was Big Mick and she is gone to be in his arms.

“My father was the world to her and we can take comfort that they are now together. We received our talent and all our achievements from our parents and we are blessed to be in this family. 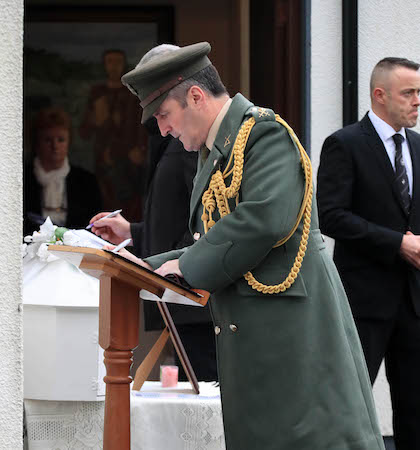 “I will always have the vision of my mother in the first pew of this church saying goodbye to my father (two years ago).

"She was the epitome of sophistication and dignity.

“Thanks to them we met rock and movie stars, presidents, kings, queens but I can put my hand on my heart it is her and my father they are the ones we will cherish and miss terribly.”

Holding his arms tightly around his sister Annie as she broke down in tears she managed to say: “She was went by many names, Eilish, Elizabeth, Lizzie, mom, grandma, great grandma but to dad she was just plain ma.

"She was a very special lady, kind, thoughtful, giving. elegant, sophisticated and forgiving.

“She left Dranagh with her parents when she was 14-years-old.

“She played the guitar and piano.

"She loved musicians such as Elton John, the Eagles and Rod Stewart’s Maggie May. She loved animals, and especially dogs.”

Mourners were told that Elizabeth was a great business woman and together with her husband she built up the successful plumbing business.

“She buried her parents here and her husband. You could take her out of Dranagh but her home was here and sadly it is her turn today."

Annie told of the great talents her parents have given their children, of singing, dancing, great business acumen and a drive to succeed and make each other laugh.

Mourners began to gather 30 minutes prior to the Funeral Mass, such was the regard for the Ryans and Flatleys. 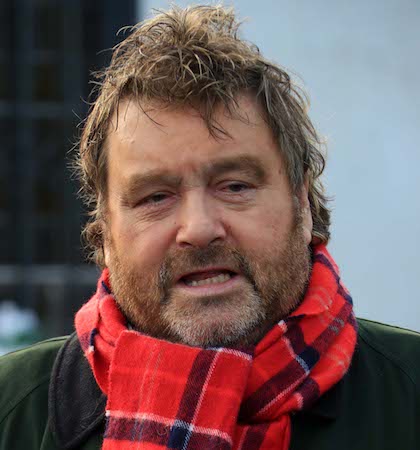 Those who attended the funeral included Taoiseach Enda Kenny’s Aide-de-Comp Lt Col Kieran Carey, Matt Molloy from the Chieftans, along with close friends Dave Egan and golf pro Brian Shaw and members of the Riverdance and Lord of the Dance teams.

Others included comedian Brendan Grace and his wife along with former rugby All Black and Munster ace Doug Howlett.

The internationally acclaimed dancer revealed on his official Facebook page two weeks ago that his cherished and determined mother passed away in the early hours of December 28.

It is understood, that Mrs Flatley, had been unwell for a short period of time.

She had visited her family in Co. Carlow, where the Flatley’s have a holiday home, only in the past few weeks but returned to Chicago in the US where she died.

As the Flatley’s laid their cherished mother to rest in St Moling’s cemetery the skies filled with sunshine as she was finally home to rest and back in her loving husband’s arms.