AT the end of 80 ferocious minutes of Six Nations rugby, neither Ireland nor Wales went home happy.

This much was evident in the final play as, with the teams tied at 16 apiece, both sides risked playing out from deep within their own half in search of victory rather than kick the ball to touch and finish the contest.

A terrific opening period turned into an absorbing battle of wills in the second-half, with neither side daring to flinch first. A 26-minute spell went by where both sides failed to adjust the scoreboard, but such was the intensity blended with terrific defensive discipline that you would have hardly noticed.

You could argue that both sides merited the victory and that neither side deserved to lose.

In that regard, it was a warranted share of the spoils. Yet, whether it is a point gained or a point lost will only become apparent when the final chapter of the 2016 Six Nations is fully written.

Ireland started this contest in blistering fashion and really took the game to Wales. The home side owned the ball for the opening five minutes and 18 consecutive phases in opposition territory yielded a penalty, when the Welsh defence was deemed to have strayed offside.

Jonathon Sexton kicked his first opportunity at goal between the sticks and Ireland took an early 3-0 lead.

Wales responded in kind with an assault of attacking endeavour that saw the men in red within five metres of the Irish line. A Keith Earls tackle on Liam Williams stopped Wales going over in the right corner and when the ball was recycled across the field Andrew Trimble made a try saving hit on Alan Wynn-Jones, as he was about to release to Tom James on an overlap in the left corner.

However, Ireland had settled the better into the contest and outworked Wales throughout the opening quarter. The Irish back row was winning the breakdown battle and carrying with relish, with Munster’s CJ Stander particularly to the fore.

Sexton kicked over a second penalty after Jamie Roberts found himself penalised for loitering at the wrong side of a ruck. 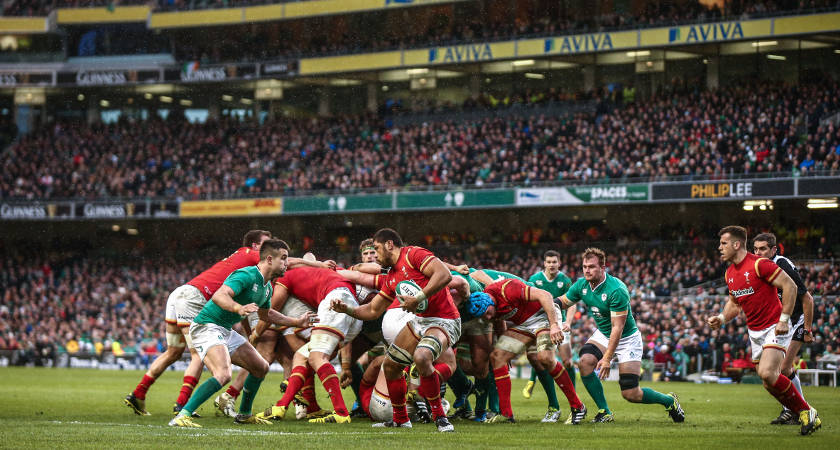 Wales were then given an additional blow when out-half Dan Biggar had to leave the field with an ankle injury shortly after missing a kickable penalty. He was replaced by Rhys Priestland.

Priestland made an initial error by kicking to touch from inside his own dead ball area when he should have touched down for a ’22. It gave Ireland an attacking platform a few metres from the Wales line.

A set-piece move from that line-out saw Stander go close, before Tommy O’Donnell made a dive for the line. His effort was short and Stander went again but was held up by the scrambling Welsh defence.

From the resultant scrum, Ireland attacked for the line with Robbie Henshaw, Jamie Heaslip and Jack McGrath going close before Conor Murray dummied and went past Samson Lee to touchdown for the opening try. Sexton converted to give Ireland a 13-0 lead.

It would be their last score for 46 minutes.

Wales looked a different outfit in the 10 minutes before half-time.

Priestland kicked a penalty between the posts for Wales’ opening score after Keith Earls’ tackle on Liam Williams was judged to have been dangerous.

Then with half-time approaching, Jonathon Davies kicked just short of the Irish line and Trimble was tackled over the line by Justin Tipuric as he gathered the ball, which resulted in a five-metre scrum for the visitors.

Wales showed their dominance at scrum time and three times in a row Ireland were penalised by referee Jerome Garces. At the fourth time of asking, Toby Falatau broke from the back of the scrum and touched down for a try. Priestland converted to see the scoreline read 13-10 at the break.

Priestland tied the scores with an early second-half penalty after Rory Best was pinged for not supporting his own weight as he rucked for the ball.

It was the last score for 25 minutes as the teams went toe-to-toe. It became an intense confrontation as both sides battled for supremacy with some fierce challenges coupled with impressive defensive discipline.

After 27 Welsh phases of possession, Ireland won the ball but Wales counter-rucked to telling effect when Jack McGrath was deemed offside and Priestland kicked Wales into a late lead. However, parity was restored within two minutes when Sexton landed a long range effort.

In the frantic final minutes, Priestland had a drop-goal effort that sailed well wide as time ran out on this engrossing encounter before a winner could be found.

Man of the Match: CJ Stander