AN POST has revealed its new Father Ted stamps have smashed all previous sales records and left the Irish postal service facing a massive backlog of orders.

The limited-edition stamps were released back on August 27 to celebrate the iconic Irish sitcom’s 25th anniversary.

Four different stamps were created as part of the collection, with each design featuring a different iconic quote from the four different main characters.

The quotes include “That’s mad, Ted”, “that would be an ecumenical matter”, “will you have a cup of tea, father?’” and “that money was just resting in my account”.

All four designs have proven hugely popular, to the point that some fans are having to wait a little longer to receive their stamps.

Communicating via the official An Post Twitter account, the Irish postal service confirmed they had been overwhelmed with orders reaching somewhere in the equivalent of two months’ worth of stamp orders in just two days.

“Please be advised that we are experiencing some delays due to the launch of the Father Ted stamps,” they said

“We received two months’ worth of orders in two days and we are working through the order as quickly as we can while still adhering to the COVID health and safety regulations.

“This will also impact other non – Ted related orders. The issue smashed all sales records but we are getting the items out as quickly as possible.” 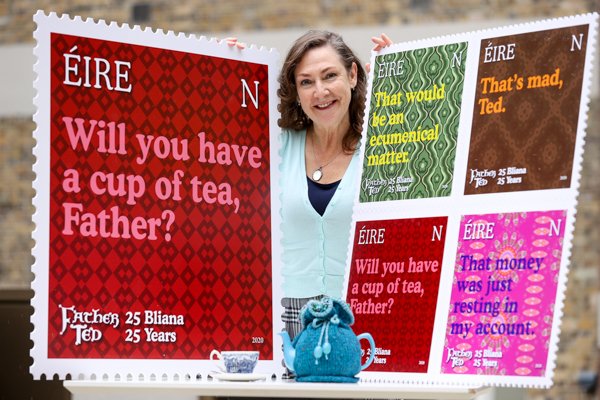 The stamps come with the approval of one of the show’s original stars.

Pauline McLynn who played Mrs Doyle on Father Ted said: “I’m delighted with the recognition Father Ted is receiving through these gorgeous stamps from An Post.

“The stamps are comical, colourful and capture the humour of Father Ted, which all of us knew was so special at the time, irreverent, farcical and fun!

“The legacy of the show and everyone involved with it lives on with Father Ted’s ongoing success and influence on language, on comedy writing and on generations of fans.”